While the average, mass-produced American butters contain about 80 percent butterfat and aren’t particularly distinctive, French butters are required to have at least 82 percent butterfat, a maximum of 16 percent water, and 2 percent vitamins, carbohydrates and minerals. Although the difference is a mere 2 percent, the higher fat content found in French butter serves to create a final product that has a richer taste and a more malleable texture.

Made by way of traditional methods, some dating back more than 200 years, these four artisanal French butters are the perfect base from which to experiment with your favorite spices, and better still, to try something new.

Located along the English Channel in northern central France, the pleasant seaside climate in Normandy has made it the nation’s preeminent butter making region for centuries; and it’s between the Cotentin peninsula and the Bessin area that the Isigny Sainte-Mère dairy was founded at the end of the 19th century.

The temperate air and regular sunshine in the area results in a landscape of verdant pastures replete with the mineral salts and trace elements that give the butter its distinctive rich color and supple texture. Isigny Sainte-Mère, like most butters in the region, are within The Protected Denomination of Origin (PDO). This important valuation means milk must be collected only within a specified range of the dairy to ensure the flavor of the final product remains true to the local terroir — just like a fine French wine.

To create the iconic Isigny Sainte-Mére butter, the cream is first seeded with a combination of lactic cultures, then allowed to rest for a minimum of 18 hours. Once the droplets are isolated, the butter is washed in fresh water, after which salt may be added. The silky and supple texture and cooking stability have long made this type a favorite among chefs.

Founded in 1894 in the picturesque village of Échiré in the Deux-Sèvres department of Western France, the PDO Échiré dairy turns out some of the world’s most esteemed butter — it’s said to be Queen Elizabeth of England’s favorite.

Still produced in the same way as it was in the 19th century, this cooperative dairy collects milk from only 50 farms, and all are located within 18.6 miles of the cheese producer. This process infuses the butter with the fresh grassiness and nuttiness synonymous with the local terroir.

This delicate gourmet butter comes in both salted and unsalted varieties, and is known for its creamy, smooth texture and subtle hazelnut flavor. To create the luxuriously fine texture, the cream matures in a special tank for 18 hours, and is then churned for another two hours in a traditional wooden churn, which creates a better cohesion of the water and fat globules. 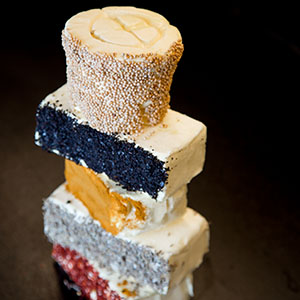 From the village of Celle-sur-Belle in the Poitou-Charentes region on France’s Atlantic coast, the Sèvres et Belle cooperative dairy produces cow’s and goat’s milk, hand-molded butter known for its bright yellow color and spreadable properties, and 3.5 percent crunchy sea salt crystals from the Île de Ré near La Rochelle. The high salt content makes it a popular and perfect topping for seafood.

The dairy matures the cream for 18 hours using natural ferments before transferring it in small batches to be gently churned for an hour and a half, ensuring that the fat cells don’t break apart. Industrially-made butters are mixed quickly and change from cream to butter within 10 minutes. This causes the fat cells to break down and the butter to be less flavorful and yielding.

Since 1972, Président butter has been produced at the Isigny le Buat butter factory in Normandy. Milk from this region has long been considered the grand cru of France, and has established a fine butter known for its smooth texture, straw yellow color and savory, nutty flavor.

Président is available in both salted and unsalted varieties as well as in a butter flavored with sea salt. Known for its wide versatility in the kitchen, Président butter is particularly prized by chefs due to its ability to enhance any ingredient it touches.

According to Sercarz, any spice can work with these brands of French butter. “The key is not to look at butter as an add-on to a recipe,” he says. “Instead, try to make it an ingredient that stands on its own but can be even better when it’s slightly seasoned.”  This can turn an ordinary piece of bread or a vegetable into a gourmet snack.

Flavoring the butter prior to cooking not only saves time, but can also alter the flavors of dishes that you have been cooking for years. “Adding spices to butter can be a shortcut when you are cooking or baking,” explains Sercarz. Keep in mind some spices need a little bit of heat, whether they come in dry or liquid form, to really shine, so it is best to experiment and see what flavors you prefer. “It makes a greater tasting experience when you have two things combined together,” he says.

Perhaps the best part about combining French butters and spices? The simplicity. The spice master himself confesses that it’s all about short one- or two-line recipes, with the only trick being subtlety — it’s important not to overwhelm the natural flavors of the butter, but to enhance them. Voila. A few simple spices mixed with room temperature butter and you’re one step closer to a finished meal the Queen of England herself would be happy to eat.

Radishes with butter and poppy seeds
• Serve raw radishes or any other vegetable with room temperature butter mixed with poppy seeds, mustard and lemon.

Butter and chili toast
• Mix butter with a dash of chili powder to taste, and serve on toast.