From popovers to pimiento spread, uncork the flavors 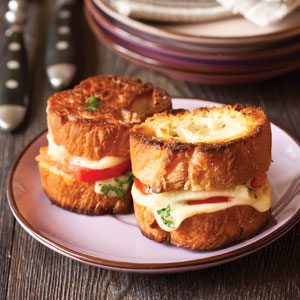 However, crumble that English classic on great bread and run it under the broiler until it bubbles and toasts, and the Cheddar blooms with all its nutty, sharp and peppery nuances. Heat releases Cheddar’s textures from crumbly to creamy and complex aromas.

Mozzarella may top national cheese polls but that popularity is entirely pizza-driven. While Cheddar originated in the British village of the same name, it holds a spot in American hearts as our true national cheese. While it has suffered some indignities along the way, Cheddar can replace the American slices, Velveeta and Cheez Whiz in those dishes that define American comfort food — from grilled cheese to the iconic cheeseburger.

When it comes to Cheddar-ized classics, the 800-pound curd in the room has to be macaroni and cheese, the dish famously popularized when Thomas Jefferson served it in the White House in 1802. Jefferson’s grated cheese of choice was Parmigiano-Reggiano. Cheddar — and florescent orange cheese sauce — came much later.

Since Cheddar can mean anything from milquetoast mild to an aged cheese with a bite, the challenge is finding the right Cheddar for mac and cheese and other recipes, says Joseph Widmer. He’s the owner and master cheesemaker at Theresa, WI-based Widmer’s Cheese Cellars, producer of Cheddar since 1922. Their roster ranges from young orange and white Cheddars and those aged from two to 10 years.

A cheese like Widmer’s 10-year aged white cheddar is for “the extreme artisan cheese lover,” he says. It’s similar to olive oils, where you save the special EVOOs for a drizzle atop a dish at the last second. Widmer says it is a waste to use it as the primary cheese in favorites like Wisconsin macaroni and cheese or Cheddar beer soup. He prefers creamier, less aged Cheddars that combine more easily.

Reserve the old stuff to sprinkle on top in the last few minutes or add some to a grilled cheese sandwich or potato gratin. That way, you g

Gordon Edgar, a cheesemonger in San Francisco, fell back in love with Cheddar while researching “Cheddar: A Journey to the Heart of America’s Most Iconic Cheese”, (Chelsea Green). Edgar’s 2015 book sought to answer a simple question: “Why did we all grow up on Velveeta?” and traced the evolution of Cheddar into “American” cheese and the rebirth of artisan Cheddar cheesemaking in the United States.

“I find Cheddar to be an incredibly versatile cooking cheese,” says Edgar. “A great thing I make are popovers at least twice a month. I will make the popover recipe using different Cheddars and get greatly varying results. I like a sharp — not extra sharp — Cheddar like Bleu Mont Dairy Bandaged Cheddar, Prairie Breeze or Tillamook 18-month.”

Cheddar has also been a standard omelet filling for Edgar — but with a little help. “I think the perfect omelet cheese is a mixture of cream cheese and shredded sharp Cheddar. You get the creaminess and the meltability,” says Edgar.

That combination of qualities lies at the heart of what James Beard Award-winning chef Sean Brock calls “pâté de Sud,” the trinity of pimiento, shredded Cheddar and mayonnaise that is revered in the South. Pimiento cheese is warmly welcomed atop grilled burgers, fried green (or red) tomatoes, stuffed in quail and spread inside omelets, writes Brock, owner of Husk Restaurant in Nashville, TN, and Charleston, SC. Pimiento cheese warms and crusts over under a broiler or in an oven, and becomes a satisfying Cheddar-y delight.

At Denver’s Il Porcellino Salumi, cured meat artisan and owner Bill Miner cures and smokes Duroc pork belly for his deli’s The Bacon sandwich. He shaves the bacon thin, doesn’t overcook it and layers it with heirloom tomato and arugula on country bread spread with apple butter and jalapeño aioli.

The Bacon And The Cheddar

Those components alone would make an exceptional sandwich, but Miner took it to another level and won a swarm of awards when he added a dollop of thick, warm cheese sauce made with Cave Aged Cheddar from Vermont’s Cellars at Jasper Hill. It’s a mess of a sandwich and a highly satisfying one.

Cheddar has been underestimated as a mate for smoked meats and earthy salumi, says Miner. “I particularly like Carr Valley Cheddar for the rich, creamy texture and full flavor, and a farmhouse-style cow’s milk Cheddar made at the Ugly Goat Milk Company in Colorado. They go great with our summer fermented and smoked sausage with mustard seed and coriander seed,” he says.

Part of the problem with cooking with Cheddar is eating the cheese before you have a chance to incorporate it into a recipe. Edgar suggests a solution to this quandary. “I’ll bring home two Cheddars. I’ll have a cheaper one to cook with and a clothbound Cheddar to eat while I’m cooking and
to add at the end — if there’s any left,” he says.

John Lehndorff is the former Chief Judge at the National Pie Championships and hosts Radio Nibbles weekly on KGNU-FM. Read his culinary blog at johnlehndorff.wordpress.com. 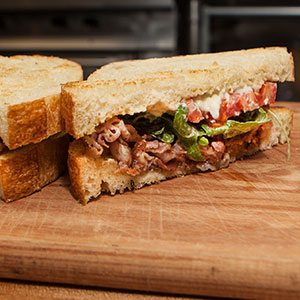 “The Bacon” Sandwich with Cheddar Fondue

• Toast bread. Spread one slice thinly with apple butter and the other with aioli. Arrange tomato slices on the bread. Cook thinly shaved bacon in a frying pan just until done but not crisp. Place bacon on the bread. Top with a dollop of Cheddar fondue. Arugula can be added in the sandwich or on the side to add flavor contrast.

• Heat the cream in a medium sauce pan until it simmers. Mix the cornstarch with 1/3 cup of cold water and whisk into the cream. Continue to whisk and add the shredded cheese. Whisk until the cheese is incorporated and fully melted. Thin as needed with water or milk, and season with salt and pepper to taste. Serve warm. Leftovers are ideal for making macaroni and cheese.
(Recipes from Il Porcellino Salumi, Denver) 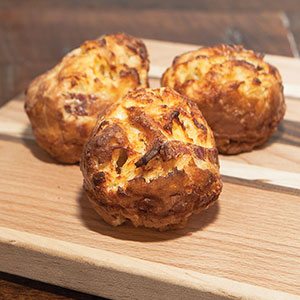 • Preheat oven to 450° F. Ingredients should all be at room temperature. Mix together (by hand) milk, melted butter, sifted flour and salt. Beat eggs and add them slowly to the batter. Do not over beat. Heavily butter the insides of a muffin tin, preferably nonstick, all the way to top. Fill a quarter of each tin with batter, a quarter with grated Cheddar, a quarter with the remaining batter and leave the last quarter empty for the puff. Place in oven immediately.
• After 20 minutes, turn heat down to 350° F without opening the oven door. After 20 more minutes you can open the door. Remove from muffin tin immediately. While the cheese will prevent these popovers from puffing as much as non-cheese popovers, they should still have expanded nicely.
(Recipe from Gordon Edgar, author of “Cheddar: A Journey to the Heart of America’s Most Iconic Cheese”) 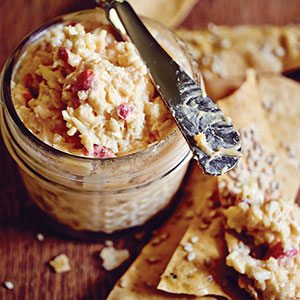 • Put the cream cheese in a medium bowl and stir it with a wooden spoon until softened. Add the mayonnaise and mix well. Add the hot sauce, salt, sugar, cayenne pepper, white pepper and smoked paprika, and stir to blend. Add the ramps (or onions), brine and Cheddar, and stir again. Fold in the diced pimientos. Cover and refrigerate until ready to serve. Tightly covered, the Pimiento cheese will keep for up to three days in the refrigerator.

Note: For creamer Pimiento cheese, combine all of the ingredients in the bowl of a stand mixer fitted with the paddle attachment and beat on medium speed for 2 minutes.
(Recipe from “Heritage” by Sean Brock)