Brave the alley and find a treasure trove of cheese pairings

To get to Salt Tasting Room in Vancouver’s Gastown neighborhood, one must venture down a cobblestoned backstreet nicknamed Blood Alley. Located in the oldest part of the city, the alleyway’s name may conjure up frightening images of nefarious pirates or gun-wielding gangsters from Gastown’s past, but the moniker’s real origin is not that scary at all. Neither is the short walk to Salt.

For its owner Sean Heather, it’s all part of the initiation. He sees it as a sort-of pre-admission test, where the two-minute walk from Maple Tree Square to Salt can prepare the patron for something different.

Originally, Blood Alley was so named because it was the place to buy fresh meat. Today, it’s the place for cured meat — and cheeses — at Salt.

So cheese lovers, have no fear. Hesitate and you might miss a pairing — or in this case, a ménage à trois — of imported cheeses matched with local and imported meats and a variety of condiments on a platter. And of course, an intoxicating complement from Salt’s extensive wine and beer selection.

The menu is simple but the flavors can be wonderfully complex. Patrons pick from a rotating list of 10 artisanal cheeses, 10 cured meats and 10 accompaniments (such as quince paste and local hazelnuts). The plate can consist of three cheeses, three meats or a combination, with pairings, as well as a three-course menu including salad and dessert. If you can’t decide, there is a “daily plate” special.

“When people come into Salt, they already have a smile on their face because they find the concept fun, interesting and interactive,” says Heather, who was named restaurateur of the year in 2013 and inducted into the British Columbia Restaurant Hall of Fame the same year. Among its awards and recognitions, Salt Tasting Room won the Cadillac Fairview Award of Excellence for its concept.

Heather calls Salt an “anti-restaurant” compared to his other eating establishments — Irish Heather Gastropub, Salty Tongue Cafe and Shebeen Whisk(e)y House. While the others required a hood vent, grease trap, oven and cooking range, Salt requires only a cheese wire and cheese slicer.

“No hot kitchen or $60,000-a-year chef,” says Heather, who trains the staff of mostly college students on how to help customers pair the delicacies of the day. “It was a phenomenal success from the get go. Salt was a relatively inexpensive venture that paid for itself in six months,”

Heather opened Irish Heather, Salt’s older sister around the corner on Carrall Street, in 1997. He wanted to own an Irish pub and the only affordable space was in Gastown, Vancouver’s northeast end of downtown. In the last few years, this area — designated as a National Historic Site of Canada — has been experiencing a renaissance, says Heather.

Ten years ago, when a space became available on Blood Alley, Heather knew he could make it work. “There were not a lot of takers interested in renting space in an alleyway.

“I knew what I was getting into. I knew the neighborhood’s capability. The alleyway was not daunting to me.”

Gastown was the perfect space for Heather to introduce Vancouver to the European concept of “grazing” on charcuterie, wine and cheeses. He also has a meat and cheese plate on the menu at Irish Heather. He renovated the former marine supply company’s interior, opening in 2006 with rustic brick walls, concrete floors and long wood tables. A flag with a giant inverted saltshaker signals you are in the right place. 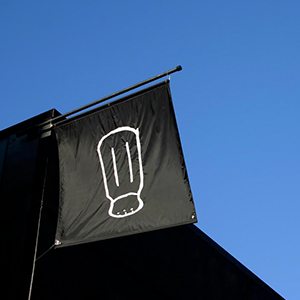 The name comes from salt’s function in making cheese and curing meat — “and it is really good at getting red wine out of his clothes,” says Heather. “It is the common thread among Salt’s main offerings.”

While Heather has been credited with helping Gastown become a more desirable area — his nickname is the mayor of Gastown — he says he was just trying to make a living. “I didn’t have any grand plans. My wife, my sister and myself — we worked hard to make a name for ourselves and fortunately, it worked.”

Today, the 50-year-old Heather — along with his wife Erin — juggle five kids (ranging in age from 3 to 12) and four restaurants.

The award-winning Irish Heather pub and Salt Tasting Room both use long tables for communal style dining. Heather first discovered the concept while dining in Chicago and thought Vancouverites would embrace the idea. “On the West Coast we are always saying how laid back and open we are, yet there was some resistance at first. People don’t want to sit there if there is someone on either side of them. But that’s the whole beauty of it.” 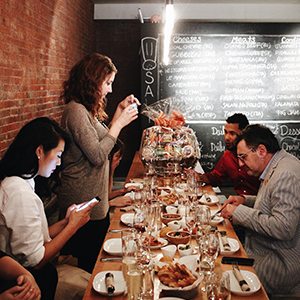 The Irish Heather’s 44-foot table seats 40 people. “Patrons would ask, ‘Is that all you got?’ ‘Yup, this is all we have.’ One drink in and they’re all talking and laughing. Soon they are talking to the people around them and everyone is getting to know each other. Then they all leave together. On the way out I want to say, ‘Hey, remember when you didn’t want to sit there?”

A Passion For Cheese

Growing up in Limerick, Ireland, Heather was surrounded by dairy farms and pastures. “Green grass meant amazing milk, which produced amazing cheese. I got bitten by that bug.” At 16, he started working in a restaurant cutting wedges of cheese to order tableside. He later went to London and worked in Maxim’s — sister location to the one in Paris — wheeling around a trolley with 32 different kinds of cheese on it.

“I had to learn 26 French cheeses overnight and I became the cheese expert at Maxim’s, which is no mean feat,” says Heather, whose favorite part of the week is the cheese buying and training. “It’s a passion. It’s one part of my week that I look forward to; it’s something that I really enjoy.” Another highlight is when he gets to forage through a distributor’s walk-in cooler to find new or rare cheeses that a broker may have received as a sample. 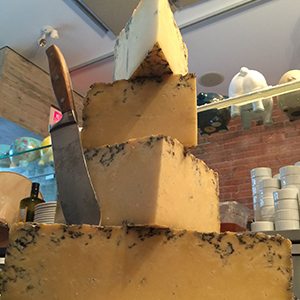 Working in London and Ireland, Heather was exposed to some amazing cheeses. “I fell in love with cheeses from Neal’s Yard Dairy and found out everything about them before I moved to Canada. I was the first to serve Neal’s Yard in Vancouver.”

The kinds of cheese offered at Salt vary, but for Heather that variety comes at a premium, due to the government’s quota system that started in the 1970s as a way to protect the local farmers.

In all these years, the government has not increased the quota, says Heather. “We really are controlled here on what we can and cannot get. Say I want to get some Jeune Mimolette from France, I have to go through a broker and the broker has a quota so they charge more to get the cheese. I’d love to get California cheeses from Cowgirl Creamery and Humboldt Fog, but I just can’t get them,” says Heather. “My hands are tied.”

A Chore For The Locavore

Star cheeses that grace Salt’s blackboard include: Gorgonzola and Bastardo del Grappa from Italy; Sparkenhoe and Isle of Mull from the UK; and Mahon and Manchego from Spain. Local cheeses are Ash Camembert, Gruyère and Morbier from British Columbia (BC), and Le Noble and Le Mont-Jacob from Quebec.

When it comes to the wines, meats and condiments, many are local and organic, produced in BC. However, most of the cheese is imported, despite the cost.

“While we can get European cheese for less than Quebec cheese, we are still paying way more for European cheese than you would in the States,” says Heather. “It’s not like in America where you call a guy in France, you order it and they ship it to you.”

Heather’s passion for cheese keeps him going. One of his favorite combinations is Colston Bassett Stilton with a native honey from the Similkameen Valley and a locally-made mead (honey wine). “It’s sweet on top of sweet, but it works well with the blue.”

As someone who is cautious when it comes to food, local Kayleigh Linehan admits she might not have chosen to eat at a place like Salt. Had she not been part of a group of friends, she would not have been brave enough to order cheeses outside of her palate’s comfort zone. She says she felt less intimidated after getting help from the server.

Linehan tried Isle of Mull Cheddar and French Mimolette, and also discovered that she loved the combination of Stilton with cured meats and organic honey. “Who knew that a Sicilian salami and a strong blue cheese would be good with something sweet?”

Darren Pierce, Salt’s operational manager, has two favorite combinations: orange-colored Mimolette cheese and salty Arbequina olives with Haywire brand Gamay Noir, a fruity local rose; and a sweet locally-produced Gruyère and salty Marcona almonds with Averill Creek Gewürztraminer, a dry white. “It is my favorite wine at the moment — dry and citrusy, and sweet at the end.”