Raw milk cheese may be the perfect food

Raw milk cheese may be as close as it gets to a perfect food. It offers near-complete nutrition with the full distribution of amino acids, a balanced ratio of calories derived from proteins and fats, and an abundance of great-for-you probiotics.

The word ‘probiotics’ means “for life,” and we couldn’t sustain life without these vital tiny allies. Probiotics are the beneficial bacteria that we all have and need for our intestinal tracts and bowels to function smoothly — and probably for much more. “Raw milk cheeses have a wider diversity of bacteria, yeasts and molds, which contribute to a healthy gut biome,” says cheese expert Max McCalman, who wrote Mastering Cheese: Lessons for Connoisseurship from a Maître Fromager.

According to Stephen Massimilla and Myra Kornfeld, co-authors of Cooking with the Muse, raw milk cheeses are not just good for us, but uniquely delectable, “unrivaled for the richness and complexity of their flavors. They are, simply put, absolutely delicious.”
Great cheese starts with high-quality milk, which in turns starts with healthy cows that feed on lush grass. “As the poet Connie Wanek points out, we should never cease to marvel at how grass and ‘even pasture daisies/through the alchemy of four stomachs/may grace a king’s table,’” writes Massimilla and Kornfeld. “When it comes to raw milk cheeses, the milk is superlative because the animals have been grazing on pasture, which is what they always did before the advent of industrial farming.”

Pasteurization heat-treats milk, killing pathogens such as Listeria and E. coli, a health measure to protect consumers. Laws stipulate raw milk cheese in the United States must be aged for a minimum of 60 days, whether that cheese is produced domestically or imported from abroad. “The FDA still uses research and studies going back to the 1960s, looking at raw milk as being dangerous,” says Mark R. Windt, M.D., specialist in asthma, allergy and immunology and pulmonary medicine for more than 30 years. “People have been eating raw milk cheese for 8,000 years, but it’s just not something the FDA is going to change their opinion about any time soon.” 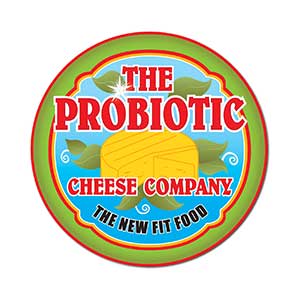 Man On A Mission

In the summer of 2012, Roxanne Barnes joined Windt on a trip to the Vermont Cheesemakers Festival in Shelburne, VT. Here, Windt lamented about all the gorgeous artisanal cheeses, most pasteurized and devoid of their probiotic abundance. Then, a light bulb went off, and the Probiotic Cheese Co. was born. The company is headquartered in North Hampton, NH, where Windt has his medical practice.

Today Barnes and Windt are both business partners and husband and wife. “She’s the MBA, and I’m the M.D.,” says Windt, although they share a passion for cheese. Barnes owned a successful mergers and acquisitions company in Texas for more than 20 years before leaving to spearhead several startups. Now she’s the business acumen behind the company.

Windt has the distinction of being the first physician member of the American Cheese Society, in which he’s been active for more than 25 years. He has not only supported and lauded raw milk, raw milk cheese and artisanal cheese, but made it his mission to bring quality, probiotic-infused artisanal cheese to as many people as possible, and support their health along the way.

Proponents of raw milk contend that pasteurization is a compromise. It obliterates dangerous bacteria that could lead to foodborne illness and even death, but at the same time, “you’re losing all the good bacteria” says Windt.

Experts contend that pasteurization offsets the diverse, powerful health benefits of raw milk.  “Cheeses made from raw milk contain all eight essential amino acids,” notes Massimilla and Kornfeld. “Raw milk cheese contains all the necessary enzymes people require to digest the milk. These enzymes are destroyed during the pasteurization process, which accounts for the difficulties many people have digesting processed dairy.”

The Probiotic Cheese Co. set out to offer a solution — the benefits of raw milk cheese in a pasteurized product. Windt and Rick Woods, an experienced cheesemaker, and formerly a sales manager/product specialist at Grafton Cheese in Vermont, “worked together for three years to get the methodology down so that we had a viable probiotic cheese that tasted really good,” says Windt.

The innovators painstakingly formulated, tested and re-formulated before landing on a cheese that succeeded in flavor, texture and probiotic content. Now Woods holds the post of vice president of creamery operations at Vermont Farmstead Cheese Co., where Probiotic Cheddar Cheese Bites are made.

Windt, Woods and their team handcraft cheese from the pasteurized milk of 60 Vermont farm-raised cows, then add back live probiotic cultures to the finished product, a firm yet creamy, young cheese inspired by cheddar.

The probiotics need to be kept cold to stay active, so the cheese provides an ideal vehicle. In fact, cheese may be even more effective than yogurt as a “home” for probiotics, since yogurt’s acidic environment is more hostile to sensitive probiotics than cheese. “For cheeses that must be crafted from pasteurized milk, the addition of probiotics offer enhancements that restore what was lost in heat treatment,” says McCalman.

The Power Of Probiotics

Windt has spent decades learning how probiotics support health. “Your gut flora and microbiome help regulate inflammation and keep you happy,” he says. Probiotics have been shown to play an essential role in maintaining healthy digestion and supporting a strong immune system.

But that’s just the tip of the iceberg. There’s a whole lot more for us to learn. And while the field is still new, early studies keep pointing to probiotics as a key component to myriad facets of health.

With the overuse of antibiotics, children often have compromised microbiomes; the antibiotics kill off the good bacteria along with the bad. Probiotics may be the key to restoring a healthy gut. Windt points to studies in Germany, Finland and Switzerland, which show women who enjoy farmstead milk and cheese products throughout their pregnancy have children with less allergies, asthma and wheezing than those who did not partake in these foods. Probiotics may help decrease stress, prevent obesity, and regulate weight. There also is evidence these protect against respiratory infection, inhibit ulcers and ward off asthma. Probiotics may even prove to be an essential ingredient in healthy skin, fighting acne and reducing sun damage.

Research is new, and there is a lot more work to be done, but these products hold great promise. It’s clear than probiotics offer “an important health benefit for the world,” says Windt.

Although marketed to children, pregnant women, diabetics and athletes, probiotic cheese is also popular with those who care about healthy eating. With a nod to convenience, Probiotic Cheese’s product is packaged as bite-size pieces in a reusable zipper bag. It’s easy to nibble right from the bag on the go, and makes a great addition to lunch boxes for kids and grownups alike. The cheese bites are available in original or savory pepper flavors. The line also is free of lactose and sugar, and contains more than 700 million CFUs of Ganeden BC30 probiotic per serving.

And it may be the only cheese of its kind available. As far as Windt knows, “there is nothing like it in the world.” His cheese is on the shelves of all 38 North Atlantic Whole Foods Stores, and he’s hoping it will be available nationally within the year.