Cheese veterans team up to bring artisanal flavors to Indianapolis.

It was back in 2014 when Laura Davenport and Fons Smits decided to start their own creamery after working together for more than 10 years at two other creameries, Traders Point Creamery and Ludwig Farmstead Creamery.

Originally from the Netherlands, Smits had traveled all over the world consulting with and developing dairy plants, focusing on small to medium scale facilities, such as Cowgirl Creamery in Point Reyes Station, CA, and the now shuttered Teton Valley Creamery in Driggs, ID.

Davenport’s background was in public health and biology, and she worked as an adult educator in hospital settings and for a health-related software company before transitioning into the dairy world in 2004.

Together, they knew their experiences would combine well, and Tulip Tree Creamery in Indianapolis was born. Smits’ main responsibilities include cheese making and production, while Davenport is in charge of sales, marketing and education.

“We worked well together over the years and felt it was time to do our own thing,” says Davenport. “Our focus and philosophy from the beginning was three-fold—to create cheeses that were unique and/or not currently being made in Indiana, to support Indiana farmers and to educate our community on what it takes to make artisanal cheeses.”

Tulip Tree Creamery is a pasture-based dairy, which, thanks to Indiana’s climate, allows the cows—all Jersey—to be in the pasture year-round. In the summer, the cows feed on alfalfa, while in the fall, the company wet wraps its alfalfa so they can enjoy fresh pasture food in the winter. Davenport explains this process, which entails cutting alfalfa and bailing it in 24 hours to keep the nutrients and protein in the feed.

“Jerseys naturally produce more protein, calcium, phosphorus and good-for-you fats than any other breed,” she says. “Our all-grass diet enhances the taste even more and offers the nearly natural consumer an alternative to conventional and multi-sourced organic milk.”

Its primary milk supplier is Dandy Breeze Dairy in Sheridan, IN, which milks around 40 Jersey cows and provides Tulip Tree with an average of 500 gallons of milk a week that it processes in its 6,500-square-foot building.

Tulip Tree Creamery’s production facility and classroom is located on the northwest side of Indianapolis in a part of town called “Park 100.” There are five full-time employees and another five or so part-timers who help with teaching, selling products and supporting sales.

“We use traditional European recipes and add our own twist to them,” Davenport says. “We are always developing new products and love receiving feedback from our customers on which types of cheese we should make next.”

All About the Cheese

Its fresh cheeses include Fromage Frais, fresh Mozzarella and cheese curds. It also offers Nettle, a winner of a 2016 American Cheese Society award, described as “bright and crumbly, similar in texture to Chevré, only made with cow’s milk.”

“These cheeses are mostly sold within our region, however, recently a few distributors have been bringing the Nettle cheese to larger cities, such as Chicago, New York and Los Angeles, due to demand and recognition because of the awards it has received,” Davenport says.

“These cheeses are our most popular, with our Trillium (bloomy rind) and Foxglove (washed rind) being our top two selling cheeses,” Davenport says. “Our Tiger Lily and Chicory are newer cheeses for us, however, they are growing in popularity, especially our Chicory, which is a small format internal and external Blue cheese.”

Foxglove is a double cream washed rind cheese that has a soft consistency when young and breaks down to a runny/scoopable cheese as it ages. Davenport explains it has an earthy, pungent flavor created by a mixture of cultures (yeast, salt and Hubbard and Cravens Porter Beer made by Indianapolis’ Thr3e Wise Men Brewing Co.) applied on the distinctive orange-colored rind.

“Our Hops is our third-most popular cheese and has been really growing in popularity,” Davenport says. “Each batch is made with a different beer, and it also was a first-place winner at the 2018 American Cheese Society Competition.”

Right now, the cheesemaker only makes one hard cheese, aged 9 to 12 months, and hard like Parmesan with an aged Gouda/aged Cheddar flavor profile. It’s currently only distributed locally, as Davenport explains Smits is still improving the recipe a bit.

“All of our cheeses are made with a natural rind, so there is little waste,” Davenport says. 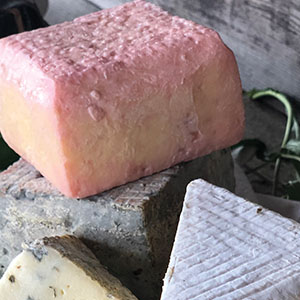 “This will allow us to increase efficiency and capacity and reduce our operating costs,” Davenport says. “We are also in the process of hiring a new assistant cheesemaker to assist Fons with the cheesemaking, as our demand is growing.”

In 2019, the company will also expand to a new distribution area in the south, looking to increase its presence in a region currently underserved.

Davenport also reveals that Tulip Tree Creamery will develop some new cheesemaking and pairing classes to be given in its classroom and at off-site locations.

“It’s an exciting time here,” she says. “We’re continuing to do what we can to meet the mission we started.”

And great cheeses are the focus.