Wisconsin cheeses can elevate a salad to create a gourmet creation

So, your foodie friends are forming a monthly dinner club to share meals and newfound recipes. The fun couple brings the dessert. The couple paying off that La Cornue rotisserie gets the main dish. The guy with the wine frig chooses the wine. That means you bring the… oh, come on… salad.

Chill. This is not a problem because you have the secret weapon — cheese. We’re not talking traditional Cheddar and Swiss, though we love ‘em both. It’s the favorite artisan and specialty cheeses, lovingly crafted by cheesemakers, taking center stage.

A month from now, you’ll be combing farmers’ markets and specialty grocers to find the next great cheese you can’t wait to introduce to your dinner club. No longer is salad the forgettable hyphen between your club’s toast and main course. Now, the salad is the stage and the cheese, your superstar.

Which do you choose first, the cheese or salad recipe? Any gourmand knows that it’s the cheese. The small army of people who make it possible for the milk, then cheese, to come from the farm animal to you, have recipes or at least suggestions. If you started with a recipe, you may spend all month hunting for a substitute for an out-of-stock, small-batch cheese.

Of course, many high-end retailers like Whole Foods have Certified Cheese Professionals on staff to tell you what to put in your salad after you fall in love with a cheese you’ve sampled.

Before they even inquire about recipes, says Joe Buckle, the CCP at the Whole Foods store in Campbell, CA, many customers ask about the cheeses’ origins, such as which are farmstead, with the animals and cheesemakers at the same location. The more information he can share from the local farm tours he’s taken, the better, he says. He’s even been asked the color of the cows.

When Buckle’s customers want award-winning cheeses, he suggests trying those made by Monroe, WI-based Emmi Roth USA, such as its Grand Cru Suchoix. This cow’s milk cheese would add nutty, fruity and mellow tastes to your salad, says its maker.

If you do not live near farms, so you can’t “buy local,” you can purchase via mail-order from cheesemakers who will ship their specialty cheeses to you the next day for little added cost.
Don’t be surprised if the majority of your Google searches point you to Wisconsin cheesemakers. If Wisconsin were a country, it would rank number four in cheese production after the United States, France and Germany. It’s truly the land of happy cows.

A well-known cheesemaker in Ann Arbor, MI, proves that gourmet cheeses are not a passing fancy. In a town where football is a religion and people buy beer by the keg, a small business called Zingerman’s grew from a deli in 1982 to the empire it is today, including a creamery where specialty cheese sales bring in $1 million a year. 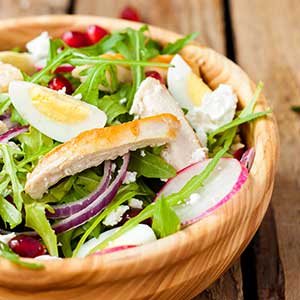 For salads, Zingerman’s hottest cheeses in its current mail-order line-up include a buttery goat cheese produced by the retailer called Ashed Aged Chelsea. You can slice their popular City Goat, which promises to not be gummy like goat cheeses you’ve tried before and loves to be paired with roasted beets. For cheese novices, Zingerman’s recommends another goat cheese, Detroit Street Brick. Though it’s studded with peppercorns, it’s subtle and clean, says its makers, unlike the street bricks outside, for which it’s named.

Ask your friends if they can identify the type of cheese in their salads when you use one of the mixed-milk cheeses, which could come from cows, sheep and goats or two of the above. The taste is unlike anything they’ve tried before, while the names are all in fun, like La Valle, WI’s Carr Valley Cheese’s Menage, and Ewe Calf to Be Kidding from Hook’s Cheese Co. in Mineral Point, WI.

Halloumi cheese, which comes from cows, sheep or goats, is the number one reason to buy a cast-iron grill pan to avoid starting the backyard grill. It’s not so much the tangy taste that’s new, but a passion for its grilled look and taste in your salad, from a cheese, no less.

Juustoleipa, a cheese that looks like a piece of a grilled cheese sandwich, is another option. Salty and sweet, it usually comes from cow’s milk. Briefly grill it and spread it with fruit jam to make mini, open-face ‘sandwiches’ to top your salad.

If you use Halloumi or Juustoleipa, make the salad small, or your friends will have no room for the main dish. 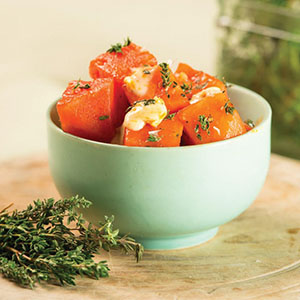 Now that you’ve found the cheese you love, and you’ve bought extra for yourself, it’s time to choose a recipe or create one.

Many salads start with a “bed,” they teach you in culinary school.

A bed can consist of sliced fruits or vegetables, tossed greens or, yes, a different cheese than you chose to top the salad.

Although nearly all salad greens are available year-round, says executive chef Zachary Walrath of the Florentine restaurant in Chicago, northerners who want to keep it local in the spring can find plenty of different types of fresh lettuce and spinach.

Now for the fun part. When it comes to cheese and salad, just about anything goes. Add color and crunch by tossing your new cheese (crumbled, shaved or cubed) with nuts, seeds, fresh herbs and/or fresh or dried fruits.

To give your salad some visual pizzazz, barely secure some lacy cheese crisps that you made ahead of time by melting small amounts of cheese on parchment paper in the oven. Any cheese will do; a sharp Cheddar makes a sturdy crisp that always tastes great.

The best salad is “fresh, vibrant, crunchy and, most importantly, healthy,” says Walrath. Salad no-no’s, he says, include frozen fruits and vegetables and anything canned or processed.
Cheesemakers urge you to go easy on salad dressings, which can drown the fresh flavors of your ingredients. Instead, drizzle a little vinaigrette or balsamic vinegar.

When you have the perfect salad recipe, name it after yourself, write it down and make enough copies for the other dinner clubbers.

Bring 2-3 quarts of salted water to a rapid boil, add French green beans and cook for one minute to blanch; refresh in cold water. Drain beans and refrigerate until dry.

Pour dressing over green bean and veggie mixture and toss.

Prep the balsamic vinaigrette. Whisk together olive oil, balsamic vinegar, garlic and sugar in a small bowl; set aside.

PrevPreviousSwiss Mad, NOT Swiss Made
NextSlow Down and Eat WellNext