Sake’s brewing process similar to beer, yet it has a taste all its own

Cheese Connoisseur: What is sake?

Ron Kapon: Sake or saki (pronounced sah-keh) is a naturally-fermented alcoholic beverage made from a combination of rice, water, yeast and koji.

Because sake is fermented, not distilled, it is not a spirit. It is more akin to beer than wine, as it is produced from rice, which is a grain, rather than from a fruit. However, flavor-wise, sake is closer to wine than beer.

The brewing process also is similar to beer, except enzymes convert starch in the rice to sugar, and then yeast causes fermentation, creating alcohol.
This is a completely natural product with no preservatives or sulfites and contains fewer calories than distilled spirits. Unlike wine, sake will stay fresh in the bottle for two to three weeks after opening.

The term “koshu” means aged sake. This specially-made sake can age for many years during which it turns deep yellow and takes on a honeyed flavor. But most sake is not aged, because consumers prefer the flavor of the fresh product. 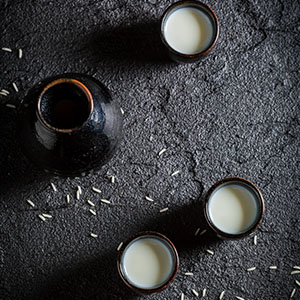 CC: How is sake made?

RK: The rice is milled to remove the outer coating until it is basically pure starch. The rice grains are then washed, steeped and steamed. Koji, a mold that facilitates the conversion of starches into sugars, is sprinkled onto a small batch of the rice. Yeast is added, along with lactic acid, to prevent bacterial infection. Once the koji and yeast are fermented, the remaining rice is gradually added. Fermentation lasts between 19 and 30 days. The sake is then pressed, filtered and pasteurized. It is diluted with water to lower the alcohol from 19 to 20 percent down to 15 to 17 percent before bottling. Most sake is pasteurized and then bottled.

CC: What are the classifications of sake?

RK: The rice is polished before being used to remove mainly fat and protein, which would cause specific flavors, aromas and tastes. This process leaves the starches in the center. The amount of material removed determines how the sake is classified.

• Ginjo-shu – At least 40 percent of the rice is polished away. With or without alcohol added.

• Daiginjo-shu – At least 50 percent of the rice is polished away. With or without alcohol added.

• Namazake – Sake that has not been pasteurized. It requires refrigeration immediately after production and should be consumed within a few hours once opened, otherwise, it will begin to oxidize.

If no alcohol is added, the term ‘junmai’ can be included in front of either ginjo or daiginjo. Nigori sake is an opaque, milky color and is the sweetest sake; it should be shaken before being served. 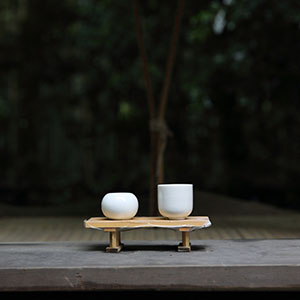 CC:  What is the history of sake?

RK: Sake was first brewed in Japan around 300 BC, but it can be traced in China as far back as 4000 BC. It was the Japanese who began mass production of sake, and Japan boasts more than 1,300 companies that produce this rice wine. Sake is also produced in the United States, Australia, Korea, China and Brazil. In 1944, during World War II, Japanese sake manufacturers coping with a shortage of rice started adding alcohol in the process of sake brewing in order to increase their production volume.

CC:  How is sake served? 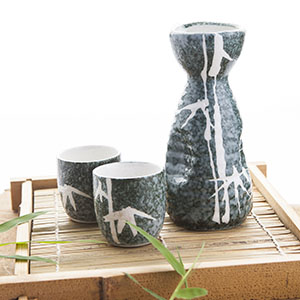 RK: Traditionally, sake is poured into the ochoko from a ceramic flask called tokkuri and served in shallow cups, called ochoko. Until fairly recently, most sake in the United States was served hot because of its questionable quality. This tactic is still employed by many restaurants, as heat masks the bitterness and enhances sweetness. Full-bodied, less aromatic sakes, like some bottles labeled junmai, are actually best enjoyed warm (around body temperature), as heat brings out the bold flavor and mutes any bitterness. In contrast, lighter, more delicate sakes (look for the terms gingo, junmai-ginjo, daiginjo or junmai-daiginjo on the bottle’s label) and unpasteurized sake (as indicated by the word nama) are best served at a similar temperature to white wine, as this allows the crisp acidity and aroma to be emphasized.

CC: What foods do you recommend pairing with sake?

RK: The proliferation of Japanese restaurants, sushi bars and Asian restaurants has exposed many more diners to the possibilities for sake pairing. The sweet Nigori Sake works with creamy dishes, a dry one with vegetables. Try Ginjo Sake with seafood, Junmai with tempura or grilled barbecue, Daiginjo with a light salad or fruit. Sake also can be substituted in recipes as an alternative to lighter white wine. Interestingly, there are more than 400 flavor components in sake, twice the number as found in wine.