The Ham of the Basque

The nearest airport is the Pau Pyrenees, located in the commune of the department of Pyrenees-Atlantique, our entry into the Basque country and the place our search for the treasure called Jambon de Bayonne—one of the most exquisite dry-cured hams in the world—begins.

Upon arriving to a heavy mist predicting future rain, with winds (called foehn) falling from the hidden-behind-the-clouds Pyrenees Mountains and balanced by the moist air from the Atlantic Ocean, one can instantly tell this is the perfect climatic balance for aging hams. From the ocean breezes and mountain air currents, frequent rain and humidity, the Pays Basque (the French name for the Basque region) becomes the ideal location for generations of cured ham producers.

Made for over 1,000 years, the coveted Bayonne ham has a history as rich as the people of the Basque. While salting techniques to preserve meat and seafood probably go back more than 1,000 years due to the salt water springs and easy access to the ocean, the process of using salt to dry cure legs of pork most likely arrived with the Romans.

Bayonne is in the French Basque area of South-West France straddling the border of Spain. The Basque country contains seven provinces, four of which are in Spain and three in France. For the people of the Basque, whose traditions go back to Neolithic times, Basque is Basque, regardless of what territory a country claims is theirs. They are fiercely proud of their culture, and it is reflected in the region’s architecture, color, festivals and products.

While the Spanish Basque are often fighting for their independence, the French have a gentler relationship. Contrasting the cultural difference between Spain and France, a French Basque family will have the choice of entering their children in a school where French is the primary language and Euskera, the ancient language of the Basque, is taught as a second language, or a parent may choose to enter their children in a Basque school where classes are taught in Euskera and French is taught as a language course. This respect for community and culture ensures respect and shared goals.

The native language, Euskera, is one of the great linguistic mysteries. To date, it is one of the very few, and maybe the only, language that can’t be traced back to its original roots. It is believed that the Basque migrated from the east over 7,000 years ago, ushering in the Neolithic Period, and became geographically and socially isolated; however, Euskera may be far older. Originally agrarians, they joined with the native hunter-gatherers of the area. They missed the Iberian migration during the Bronze age and later the invasion of the Iberians in 714 AD. Their genetics show little in common with either the Spanish or the French.

The story of Bayonne ham is more recent, but no less interesting. It is also utterly delicious and suitable for every meal. It may be served in the morning with a poached egg or eaten thinly sliced on fresh crusty bread with the equally famous sheep milk cheese of the region, Ossau Iraty. Whether cooked or eaten as is, it is a pink to deep red color surrounded with snow white fat.

Even though it is cured with salt, it is not salty, tastes sweet and nutty, and has a silky mouthfeel. Elegant and very refined, it is to France what prosciutto is to Italy.

While the origins are a bit of mystery, as are all things Basque, legend has it that Bayonne Ham was created after an extraordinary hunt. One day, Gaston Febus, the Count of Foix, wounded a wild boar, which then ran off. The boar was not discovered until months later in the Salies-de-Bearn salt water area, perfectly preserved.

More logically, salt-curing was well known by then, and it was refined by the Romans who had a long history of curing pork with salt and natural winds. Additional evidence is the similarity of production between the prosciutti of Italy and Bayonne ham of France.

The native pig is an unusual creature and not the best for commercial production. Called the Pie Noir du Pays Basque, it is as its name suggests—a piebald black and pink animal. It takes longer to mature and puts on more internal fat, making it the perfect pig for Bayonne ham. Today, the breed mostly has been supplanted by the large white breeds. The Pie Noir almost disappeared by the 1980s, but are seeing a slow resurrection, as demand for authenticity and the preservation of original species grows.

Regardless of breed, pigs must not be fed or treated with steroids, fish oils or antibiotics. The piglets must stay with the mother and all must be allowed to free forage on roots, corn, nuts (usually acorns) and grasses. In addition, they may be offered cereals.

Up in the mountains, it is not unusual to see free roaming sows and piglets wandering the side of the road, foraging as they go. At night, they will return the farmer for dinner and a good night’s rest.

Bayonne ham is an EU Protected Geographical Indication (PGI) product, and strict rules and regulations are necessary for the rearing of the pigs, production and aging of the hams. The controlling body for enforcing regulations is the Consortium du Jambon de France.

Pigs to be used for Bayonne ham must be born and raised in southwest France. The production of the ham must be done in the Adour Basin, nestled between the Atlantic Ocean and the Pyrenees Mountains.

Part of the beauty of Bayonne ham is its simplicity. There are three ingredients—pork, salt and air. Just as important as the pork is the salt that will transform a raw leg into a dry-cured ham. The salt cures the ham, drawing out the moisture and acting as a preservative.

The salt that is required to be used in the salting and curing process is Salies-de-Bearn. This salt has been harvested since the Bronze Age. It is a treasure found under the Pyrenees Mountains that rises to the surface through natural waters and salt springs.

The Queen Jeanne d’Oraas’ salt spring is especially pure and produces salt water that has a concentration of salt 10-times stronger than seawater. The salt at Salies-de-Bearn is produced very simply; the water is evaporated in salt trays. It is 100 percent natural, but rich with trace elements, especially magnesium and iron.

The Salies-de-Bearn salt is known by gastronomes throughout the world for its taste and health benefits. It is the cornerstone to Bayonne ham and it is, in fact, owned by the Bayonne Ham Consortium.

While the first salt plant was built in 1899, like most of the Basque, its history is far older.

The salt springs were well known long before 1899 and a cornerstone of the economy as far back as 1583. The Book of Salies names the original 500 families that formed the first coop, and they still own the rights to the salt springs.

Even today, descendants of the original families still receive their fair share of the profits. However, they must reside in the city. If you are a direct descendant, you may move back to Bearn and claim your birthright.

Take a walk around town and you will find older homes with a trough out front. It was at these houses’ salt troughs where buckets of water would be brought to evaporate and the resulting salt was then used. Even today, the water and troughs are still in use, and a family can take as much water as they want. 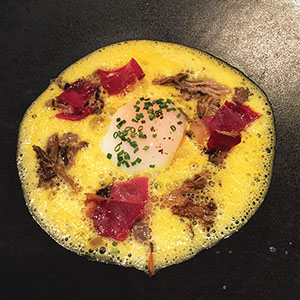 Aged for a minimum of nine months, Jambon-de-Bayonne is produced using traditional methods. It is believed that nothing is a secret when you trust in a product that has a respect for tradition. Each step plays an essential part in curing the perfect ham.

Producers may only use legs from authorized slaughterhouses, and they must be transformed within seven days.

The salting is done in winter-style conditions. The fresh hams are rubbed with salt exclusively from Salies-de-Bearn. They are then covered in a thick layer of salt and placed in the salting room.

The hams are hung to rest at low temperatures, where the environment is kept artificially winter-like, using modern techniques. They will stay there to begin to dry.

After a period of resting, the hams will be hung from the rafters where the long process of maturing begins.

After a period, the process called “Panage” is done to slow down the aging process. A mixture of pig fat, rice flour and pepper is applied to the exposed part of the ham. This will allow for a gentler aging and the curing of flavors during the long process.

While the ham is maturing, it is developing its mild and refined flavors. The hams must be aged for at least nine months, but depending on the size of the ham, it may take as long as 12 months. Hams can be aged up to 22 months, but they are generally preferred younger.

The final step is the testing period, when the quality of the ham will be assessed by independent and highly-qualified experts. After passing rigorous quality control steps, the ham will be branded with the Lauburu Cross, the Bayonne seal.

There is only one step left and it is to enjoy the beautiful product called Jambon-de-Bayonne or Bayonne Ham. Beautifully made in a geographic area surrounded by natural beauty and a heritage as old as the Pyrenees, the Basque people continue to amaze with their joy for life and fierce independence coupled with grace and refinement.

Better yet, put the Basque country on your bucket list. Surf in Europe’s hottest spot, Biarritz, where the seafood is hours old. Hike the Pyrenees and indulge in duck, goose and dark black cherries that pair perfectly with local sheep milk cheeses. Seek out the festivals.

And, if you have a few spare hours, visit the town of Espelette with its picture-perfect white and red Basque houses with Piment d’Espelette hanging from the rafters. One of the world’s most prized spices, Piment d’Espelette are dark, cherry-red peppers that are naturally dried and smoky, sweet and spicy.

Oh, one last tidbit of intrigue. The Makhila, the prestigious walking stick of the Basque. Elegant and practical, it is the perfect walking companion that can be used as a weapon of redoubt.