For people who love dairy and cheese, a visit to The Netherlands is a must. So prevalent is the national love of dairy that it’s difficult to avoid the sight and smell of cheese, or ‘kaas’ in Dutch. From the proliferation of independent cheese shops to the tourist attractions based around huge yellow wheels, for such a small country there’s a lot of cheese to be had.

The most popular, and the cheese that accounts for 60 percent of the entire product this dairy-loving country produces, is Gouda. Named after the town of Gouda, located in the south, this small city never produced its namesake but was the trading capital for Gouda sales.

Historically, cheese was brought to Gouda to be weighed, taxed and traded, and this is how the town located in South Holland, an hour away from Amsterdam by train, came to be associated with cheesemaking.

Once one passes through the homogenous high street that follows from the railway station, the center of Gouda does not disappoint. Towering over the marketplace, where during the summer a weekly cheese market is still held, is the Gothic town hall dating from 1450. The hall rises from the ground in tiers, almost like a decorative wedding cake, which is apt as town business is no longer conducted there, and it’s now mainly used as a wedding venue.

Surrounding the marketplace is a feast of places to dine in, but if you’re looking for the ultimate cheese soup then may I point you in the direction of De Zalm hotel, where a Gouda soup is served that borders on fondue.

De Zalm once held the title as the oldest hotel in Holland, and its restaurant was modeled on Paris brasseries, so it’s resplendent in vintage grandeur. As delightful as the atmosphere of De Zalm is, it’s time to move on. From the restaurant’s bustling outside terrace, it’s a mere stride to The Wagg, where inside you can see the original equipment used to move the farmers’ cheese from cart to weighing scales. It is so perfectly preserved that if it were not for the shelves of souvenirs, one could imagine a farmer aboard a horse and cart trotting in to conduct business. 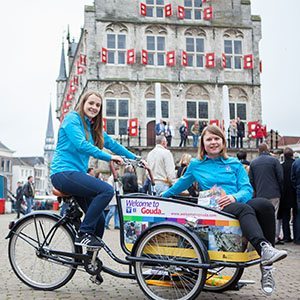 The building was designed by the architect Pieter Post and completed in 1669. The mayor of Gouda at the time wanted to show his town’s wealth by commissioning this grand, three level structure. Yet, practically speaking, only the ground floor was needed to conduct business.

The top floors were rented out then, and even today one can hire the beautiful room on the middle floor for parties. I almost want to get married again, just so I can have a reception at the long tables and fill the bluebell colored shelves with flowers.

Like so much of the old Gouda town buildings, it’s a romantic construction, as well as a wonderful resource for anyone interested in the history of cheesemaking. The cheese trail does not end with The Wagg; almost every spot you visit has some connection with the business that has helped make the town so wealthy and influential.

This is why the Gouda Tourist Office, located in The Wagg, has produced a handy cheese guide to steer visitors around monuments and shops rich with cheese history and taste.

Although the traditional cheese market is only held during the summer months, there are still regular markets during the week and on Saturdays. Here you will find many cheese stalls all competing for your attention.

Stacks of round cheeses and great wedges ready for more slicing perch on the counters, and even though the sea air carries away much of the aroma, as you move closer to the stalls the smell envelopes you.

The first cheese I taste is an eight-month, a relatively young cheese that has a semi-soft yet firm texture and a mild flavor. I can imagine it would taste wonderful with apple or pear in a salad.

The next is an 18-month-old, aged on wooden shelves, that has a very intense, sharp flavor that lingers pleasantly after swallowing. Tasting of caramel, nuts and hints of whisky, its flavor has a delightful sweetness with deep nuances. Surprisingly, tiny crystals of calcium lactate and tyrosine throughout the cheese give it a crunchy mouthfeel.

The name Gouda has been popularized and the cheese is made throughout The Netherlands and in many countries of the world. The cheesemaking process is always similar but may include Gouda made with cow, sheep or goats’ milk. The fat content may vary, and animal, vegetable or microbial rennets may be used.

In order to protect and preserve the original and most traditional Gouda, The Netherlands applied for and received Protection of Denomination of Origin status (PDO) for Noord-Hollandse Gouda or North Holland Gouda. A semi-soft, sweet curd cheese made from whole and partially skimmed cow’s milk, it ranges in size from 6 to 50 pounds. It is always pasteurized and made using calf rennet.

The process of making North Holland Gouda starts, as one would expect, heating the milk and adding the rennet. At the proper time, the culture is added. In this case it’s type-A lactic acids, Lactobacillus lactis, Lactobacillus cremoris and Leuconostoc cremoris. It is this very specific cocktail that gives traditional Gouda its very special taste.

But there is another trick the old cheese masters perfected. At a certain point, most of the whey is drained and replaced by hot water. Aptly called a washed-curd cheese, apparently the reason for this goes back to the days of wooden vats in which the cheese was made. These vats could not be heated so hot water was added to increase the temperature of the curds.

Today, the curds are washed to create a cheese that has a non-acidic taste. The water stops the acidification process and makes for a sweeter flavor.  After the cheese has taken its characteristic round shape, it will be soaked in salt brine for a few days and then removed and left to age in warehouses. While materials are changing, typically wooden shelves were used to age the cheese and still are in some cases.

North Holland Gouda may only be made from cows grazed in the North Holland polders, the most famous of which is the Beemster Polder, now a World Heritage Site. Constructed in 1612, this famous flat landscape covered in swaths of green grass, was one of the first experiments in reclaiming agricultural grounds from the sea. Extremely rich in nutrients, the milk produced is considered to be some of the finest in the world.

Dutchmen were traders and famous for their cheese exports. Crossing the Atlantic, they settled in the area now called New York City, bringing with them technology developed in the Beemster Polder. Beemster became the model used to drain and build this magnificent city.

One thing lacking in the polders was wood and on return trips, Dutchmen brought back hardwoods from the North American forests. Today, visiting the cheese-aging warehouses, you may find the same 400-year-old wood being used to age cheese. It is a rather eerie feeling to be standing in a warehouse filled floor to ceiling with wheels large and small of Gouda aging on dark boards hard as steel and smooth as glass. 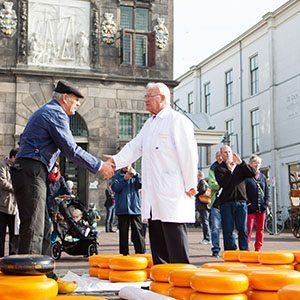 The rafters and beams are hand-hewed with original cuts and marks. Realizing this unique cave is filled with wood from forests outside of New York City that have long ago disappeared gives one a feeling of wonderment about cultural exchanges and the sharing of wisdom.

While the North Holland Gouda PDO is the most traditional, the Netherlands produces many varieties that fall outside of the PDO requirements. Gouda is often made from the milk of sheep and goats. Ewephoria Sheep Milk Gouda is exceptional Gouda from North Holland made from pasteurized milk and microbial rennet. Goat Gouda is becoming quite commonplace. Snow white in color, it is often young, sweet and creamy with notes of sour cream or yogurt on the nose.

Flavored cheeses are also very popular and U.S. cheese lovers have embraced these tasty varieties with a passion. Since the number of cheeses produced is limited, the varieties are endless. Often flavored with cracked pepper, cumin, caraway, herbs and pesto, other flavors such as truffles and coconut are also being made. CC