Cheeses Along The European Waterways

Take a delectable journey down the rivers of Austria, Germany and The Netherlands

Everywhere there is milk, there is cheese. The alchemy of an excellent cheese is well known: the skill of the cheesemaker, the species and diet of the milk source, even goût de terroir. Cheese tasting gives the traveler not only the experience of world flavors, but also of culture and place.

On a recent Viking River Cruise — Budapest to Amsterdam, 12 days aboard the Viking Lif on the Danube, Main and Rhine Rivers — we stopped at ports in Austria, Germany and The Netherlands. While enjoying all that Grand European Scenery, I was introduced to several distinct cheeses, some of which are available in the United States.

From our first meal, a melt-in-your mouth Chateaubriand, I knew we were in for exceptional dining; and I made it a point to compliment Slavi Nedev, our executive chef. A few days and many great dining experiences later, I spoke to our hotel manager, Jadranka Brajkovic, and asked if it would be possible to learn more about the cheese in the countries we would be visiting. She checked with Chef Nedev, and he agreed to educate me in a very delicious way about European cheese.

Vienna was our first port-of-call and Austrian cheeses are some of Chef Nedev’s favorites.

ROLLINO:
Upper Austria near the Alpine foothills
If you like cream cheese, you will love Rollino. Created from pasteurized cows’ milk in the Alpine foothills of upper Austria, this is a cream cheese that goes well on any cheese plate, paired with a nice cracker or crusty bread. The cylinder we sampled had been rolled in a herbaceous mix of chives, dill and parsley. It is also available with Italian herbs (oregano and basil) and a pungent, fiery Oriental pepper blend. Happy on a cheese platter, this roll of creamy goodness is your all-around, do everything cheese. Rollino is delicate, easy on the palate and well-suited to almost any wine.

Chef Nedev’s choice of condiment was honey based. This provided a creamy consistency and sweetness on the tongue. Of all the cheese samples Chef Nedev presented, this was my favorite.

Rollino can be used in any recipe calling for a cream or soft cheese; spread as a base on bruschetta or in pizza rolls. Be careful not to overwhelm its mild flavors, or you might as well be using a less exotic cream cheese.

Where To Buy: Sadly, Rollino is unavailable in the United States. Time to book a flight to Austria.

WEINKASE: (translation – Wine Cheese), also called Lagrein Weinkase
Alto-Adige region of Italy
Don’t be misled by its Germanic name, the origin of this semi-firm cheese is actually in the Alto-Adige region of Italy. However, the proximity to the Austrian border (and the use of Austrian wine) makes Weinkase as popular in Austria as any home-turf varieties. Made from pasteurized cow’s milk, the texture is much like a Brie. The black outer skin comes from washing it with Lagrein, an Austrian red wine. Herbs, garlic and pepper are added to the wine during the five- day soaking process, giving the cheese salty, meaty overtones, rather like the flavor of a mild salami. The dark, moldy rind is not harmful, but may be intimidating. If the molds bother you, you can wash them off with a paper towel dipped in wine vinegar or peel the cheese.

Chef Nedev paired the Weinkase with a fruity compote to enhance the cheese flavor. Weinkase is more suited for cheese plates and eating plain, as the black skin isn’t conducive to cooking. However, leftovers can be used as an unusual meaty kick cubed into your cheese pasta sauce.

Where To Buy: If you have an exceptional cheesemonger, Weinkase may show up in their inventory. If you’d rather not leave it to chance, Weinkase can be bought from Murray’s Cheese in Greenwich Village, NY. Telephone: 888-692-4339 or order on-line at www.murrayscheese.com.

ÖSTERKRON:
Styria area of Austria
Before leaving Austria, Chef Nedev finished with a much different cheese, Österkron. This type is produced in Styria, a mountainous region of southeast Austria. A region of this nature, dotted by imposing mountains, old castles and venerable wineries, would naturally produce a hearty cheese. Österkron, with a high fat content of 22 percent and equally strong taste, is easily recognized by its noble green mold color.

Chef Nedev paired the crumbly Österkron with a plum compote, less fruity than that served with the Weinkase. Normally, I’m not a fan of the Blue cheeses, but this one had a nice balance and was not so strong as to be offensive. It is a versatile cheese, equally at home on the cheeseboard as in spicy soups and sauces, crumbled over salads or salad dressings, or standing up to “overbaking,” forming that delightful crusty topping on casseroles.

As we cruised the Danube and glided through the beautiful Wachau Valley, our Austrian cheeses were the very definition of that scenic combination of imposing castles juxtaposed with the serenity of the vineyard terraces clinging to the steep hillsides.

Heat the oil in a large saucepan and then add the onions. Cook on a medium heat until soft. Add a splash of water if the onions start to stick.

Add the celery, leek, potato and butter. Stir until the butter melts, then cover. Allow to sweat for 5 minutes. Remove the lid.

Pour in the stock and add any chunky bits of broccoli stalk. Cook for 10-15 minutes until all the vegetables are soft.

Add the rest of the broccoli and cook for 5 minutes. Carefully transfer to a blender and pulse until smooth. Stir in the cheese, allowing a few lumps to remain. Season with black pepper and serve.

Where To Buy: Two German companies carry Österkron, Affineur and Schärdinger. It is difficult to buy the “real deal” in the United States. A nice Blue cheese can be substituted.

Passau, the City of Three Rivers, was our first German town. It lies at the confluence of the Inn, the Danube and the Llz Rivers. Known for its Roman fort, its strong ties to the Holy Roman Empire, and as the center of the salt trade, commerce was key. Just as Passau commands this river confluence, the strength of the German cheeses is like a fist.

HARZER:
Named after the Harz Mountains south of Braunschweig
Another cows’ milk variety, Harzer cheese is easy to recognize because of its cylindrical shape and clear packaging. Harzer cheese is very low in fat (only 1 percent) and high in protein (30 percent). Made from sour milk, this cheese is popular with athletes and those on special diets. The smell is as undeniable as its strong flavor. Some cheese connoisseurs use it as a substitute for the famously odiferous Limburger.

Notice the scoring on the Harzer cheese. This is because originally, the cheese was formed by hand, and is, in fact, a type of Handkäs (hand cheese). Chef Nedev complemented this cheese with a fruit compote combined with a touch of honey and red vinegar, which nicely tamed the strong bite of the Harzer.

Harzer is not generally considered suitable for melting, though several traditional recipes call for marinating it. 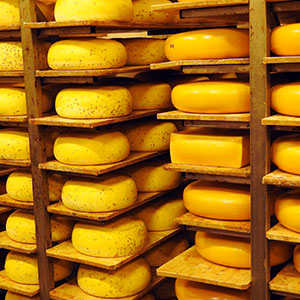 The Netherlands is, of course, renowned for its Gouda. Walking around Amsterdam, I spotted several cheese museums that sold variations of this cheese. Though, if you have a choice, indulge in the artisanal selections at the various street markets.

One of the highlights of our Viking River Cruise, however, was to get up-close and personal with Gouda cheese production. At Kaas en Zuivelboerderij Kuiper (Kuiper Cheese Farm), located in proximity to Amsterdam, we were able to follow the cheesemaking process from source to finished product. The Kuipers produce a wide variety of Gouda.

The Kuiper operation has 250 cows, and they milk 230 twice daily. The 1,600 gallons of milk are heated and processed into a thick, yogurt-like brew, which is separated into curds and whey. The whey is pumped out and sent to a pig farm, while the curds are pressed with metal plates and put into round containers for two to three hours to form a firm, round cheese.

The rounds are taken to wooden shelves to dry. They are turned every two days until they are two to three weeks old, at which time they are ready for market.

Kuiper has an on-site store to sell cheese by the slice or in small quantities to visitors and locals, but excellent Gouda is readily available worldwide.

Delicious by the slice, Gouda will happily melt and meld in everything from grilled cheese sandwiches to dips, pastas, omelets, quiches, even grated over friets (that’s French fries to you and me).

As a Southern lady, it’s imperative that I have a cheese straw recipe. Gouda makes a great one — and with pre-made puff pastry, so easy you barely need a recipe.

Before embarking on my cruise of discovery, I thought I knew cheese. I now know I have a long way to go before I have a true grasp of this food. From its manufacture to the cultures that produce each country’s distinct cheese tastes, what a delicious journey.