It’s been said that Eve offered Adam the apple just so she could keep the pear for herself. I admit, it’s a bit apocryphal, but in my book, totally understandable. Of all the orchard fruits, pears are the most versatile in varieties and culinary prowess. Not to mention, also can be found in two separate species — European and Asian.

Now if you think this fruit is all the same and only something to pack in school lunches or to snack on in the office, then you do not know pears.

Permit me to introduce you to this fabulous fruit.

Visually, it’s easy to tell the European pear from the Asian. The European is smooth-skinned and may have a benign bump or two before gently curving into a bottom-heavy shape, which is where we get the description of someone having a pear-shaped body. Colors of the European pear can range from bright yellow to speckled to a deep-red blush, and to greens and browns. The Asian pear, on the other hand, enjoys a more limited color palette, staying in the yellows, tans and browns, with a few rosy hues and speckles found in the roster of varieties. But it’s the shape that sets the Asian pear apart. It’s more akin to that of a plump, round apple.

Along with their shape there are two other distinctions between the two species. European pears ripen from the inside out, so they’re picked before their prime. When choosing, look for pears firm to the touch. Leave firm, unripe pears at room temperature to ripen. A surefire way to tell if a European pear is ripe is to gently apply pressure to its neck, the area just below the stem. If it yields, it’s ripe.

Conversely, Asian pears are picked ready to eat; no waiting time needed. However, if you must wait, then store this fruit in your fridge; it’ll easily keep for a few weeks. Their European cousins, however, are more delicate. And, though, you can store this variety cold after it’s ripened, it’ll only keep for a few days — a week at best.

And Asian pears tend to be crisper than even the crispiest European pear, the Bosc.

But don’t go by appearances alone. For each species is a tasty treasure with its own texture, flavor profile and level of juiciness. And all types are good for you. Both the European and Asian pears are low in calories, have more Vitamin C and fiber than apples and contain antioxidants to help prevent many forms of cancer as well as gastroenteritis and other illnesses.

Pears are believed to be native to Persia and Turkey and grew wild since prehistoric times. Over the centuries, horticulturalists and traders spread the cultivation of both species. In Ancient Rome, botanists identified more than 50 varieties of the European pear. And by Catherine de Medici’s time, there were close to 200. Today more than 5,000 varieties are known throughout Europe, but only about a dozen are grown commercially. Many of these varieties had made their way to America, beginning in 1629 with the early settlers. Because they were grown from seed, the pears did not breed true to variety, producing instead, ranges that are considered pure American.

Today, America is the third largest pear-producing country in the world.

According to USA Pears, a website dedicated to pears, there are 10 European varieties of this fruit grown commercially in the United States. And although many small family orchards offer pears, the majority of this country’s varieties come from Oregon and Washington. These are the Green Anjou, with a medium sweet flavor and soft and juicy consistency; Red Anjou, a type that’s a little sweeter and slightly firmer; both Bartlett and Red Bartlett, which are quite sweet, very soft and juicy; the crisp Bosc, a mildly sweet variety that is not particularly very juicy; Comice, a very sweet pear that’s also soft and juicy; Concorde, which is on the crisp side and very sweet; Forelle, with a medium crispness and less sweet than the Bosc type; the crisp and sweet Seckel; and Starkrimson, distinguished by its softness, juiciness and sweetness.

Asian pears also enjoyed the cultivation of different varieties before finding their way across the Pacific in the 1850s with Japanese and Chinese immigrants. Although mainly grown in California and Oregon, Asian pears are also found on family orchards and commercially along the East Coast. The largest commercial orchard, Subarashii Kudamono, which means ‘wonderful fruit’ in Japanese, is found in Eastern Pennsylvania.

Along with about six traditional varieties of Asian pears, Subarashii develops its own patented varieties. To date, the orchard has developed six. These include AnsaSan, which is very crispy and juicy with sweet, rich flavors of fresh melon and green grass; AsaJu, with a flavor that’s semi-sweet and delicate, though quite crisp and juicy; JunoSan, which is more distinct and slightly sweeter than AsaJu, yet also very crisp and juicy; EliSan, a very sweet and complex flavored pear; LilySan, a mild, semi-sweet, crisp and juicy type; and SuSan, which is very sweet with a lush, rich flavor, and also quite crisp and juicy. In addition, Subarashii makes a pear spread as well as dried pears.

I can think of no other fruit that is as enjoyable to eat raw by itself, paired with cheese or cooked than a pear. The Greek poet Homer called pears “a gift of the gods,” and ever since the royal court of France’s King Louis IX, chefs have adored cooking with this fruit. This includes everything from appetizers to salads to butters and chutneys and from entrées to desserts, including sorbets and ice cream, and to making wine and port. Famed French chef Auguste Escoffier married poached pears with vanilla ice cream, topping the concoction with a warm, rich, dark chocolate sauce in his still popular recipe Poires Belle-Hélène. 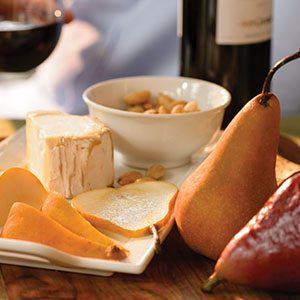 For me, the aha moment of the glories of cooking with pears came by accident many years ago. It was winter when friends called to say they were dropping by and asked that I make my famous apple crisp. It wasn’t until I hung up the phone that I remembered I had no apples in the fridge, only pears.

After a moment’s hesitation, I grabbed the pears, substituting them for the apples in my recipe. The result was better than I had hoped for, and my friends claimed my crisp was even tastier with pears.

Since then, I have roasted, poached, grilled and baked with pears. I’ve used them raw in salads, and prefer this fruit over apples in a Waldorf. I’ve even been known to slip a few thin slices of a Bosc or an Asian pear inside a sandwich to add some crunch, sweetness and juiciness in place of a tomato. Pears just seem to elevate the flavor profile of everything they are paired with.

Add chopped pears next time you make a stuffing for pork chops, chicken or stuffed mushrooms, then wait for the applause that is bound to come. And when it comes to roasting winter’s root vegetables, add chunks or thick slices of pears to the mix. Preheat your oven to 375 degrees F. Clean and cut a mix of root vegetables, such as fennel, carrots, parsnips and onions, in addition to chopping a few pears into large chunks. Place these ingredients in a large roasting pan, toss with extra-virgin olive oil, sea salt and freshly-ground pepper and place in the oven for about 20 minutes. Remove the mixture from the oven and flip the vegetables and pears over to brown on the other side for another 10 to 20 minutes, or until the veggies and pears are browned but still slightly firm.

Still my favorite way to eat pears is with cheese. This is a natural duo in both savory and sweet dishes. Remember that pear stuffing? Next time you make it, mix in small cubes of mozzarella for a seductive taste sensation. Likewise, when roasting pears and root vegetables,. liberally grate fresh Pecorino Romano over all, toss, and then sprinkle more of the cheese on top before roasting.

And, though like wine, some pears may pair better with a certain cheese, I’ve yet to find a cheese — from a creamy Brie and Camembert to an aged Gouda, Cheddar and Parmigiano-Reggiano to the mighty blues, like Stilton, Roquefort and Gorgonzola — that doesn’t exalt the flavor of the pear. Likewise, it doesn’t matter to me if the cheese is made from cow’s, sheep’s or goat’s milk.

One of my go-to simple ways of serving pears and cheese is to roast a medley of this fruit to top over a soft goat cheese or a buttery Brie. Another even simpler, and just as delicious but also refreshing, option is to cut a few slices of pear to set on a cheese plate, with an additional one or two pieces of fruit alongside for further slicing. Pear spread works just as well with the former and the dried version with the latter.

Still, you’ll find there are some suggested classic pairings, such as an Anjou with a Chévre, especially an aged goat cheese, and a Camembert, even one made from goat’s milk. The crispier pears, such as Bosc and Asian, pair well with more assertive cheeses, such as aged Cheddars like a Manchego, Cheshire and Pecorino Romano. Although I find these also pair nicely with softer, creamier cheeses like La Tur and Cambozola.

I asked Chef Terry Wilson, culinary advisor at Subarashii Kudamono, what is his favorite way to eat the two together when at home and no one is watching. He likes pairing a fresh Asian pear with crackers and a wedge of Fromager D’Affinois, a rich, buttery double-crème cheese. “The cheese is subtle but strong enough to pair with the sweetness of the pear,” says Wilson. “And putting the two of them on top of a favorite cracker provides a wonderful food experience, combining sweet, salty, earthy, creamy and crunchy. It has everything I need from a food experience in only one or two bites.” 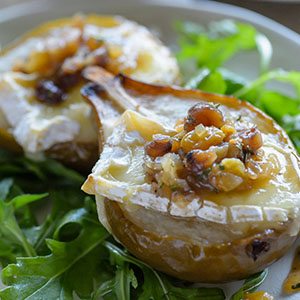 For the relish: Bring the cider, honey, shallot and raisins to a boil in a small saucepan over medium-high heat. Reduce the heat to medium-low and simmer until the mixture thickens, 10-15 minutes. Remove from the heat, stir in chestnuts, remaining vinegar, rosemary and salt. Cool the relish to room temperature before serving, or cover and refrigerate up to one week.

To roast the pears: Preheat the oven to 375°F. Halve and core the pears and place them in a baking dish. Rub them with just enough olive oil to lightly coat, and sprinkle all over with the salt. Position the pears cut-side down and roast for about 30 minutes. Turn them over and continue  roasting until tender, 5-10 minutes. Remove pan from oven and lay a slice of Camembert on top of each pear half. Return the pan to the oven and continue roasting to melt the cheese, about 2 minutes.

To serve: Toss the arugula with 1 Tbs of olive oil and divide among 6 salad plates. Place a warm pear half over each and top with a spoonful of the chestnut relish. Serve immediately.
(Adapted from usapears.org )