When onions met broth, bread and cheese, a classic was born

Crockery crowned with a blistered dome of cheese and bread arrives straight from the broiler. The best French onion soup is never ladled from a pot; it’s crafted into a layered experience. Excavating through the Gruyère, the first spoonful of still-too-hot onion slivers are unveiled. The steam’s herbal notes emerge, along with a hint of the wine that is sweetening the slurp-worthy bone broth.

“Soup” seems a tame name for a dish that provides entrée-like satisfaction, which lasts from the first crunchy blisters on top to the final, substantial cheese-thickened slurp. All that’s needed to make it dinner is crusty bread, unsalted cultured butter, lightly-dressed greens and a nondescript red table wine. 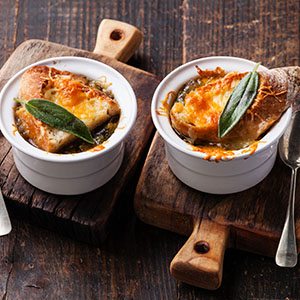 Onions started showing up in soups almost as soon as the Romans and other ancients started cultivating them. The poor people’s vegetable happened to boast numerous health-enhancing attributes. It’s no wonder that few of the world’s great soups don’t involve the onion family.

Soupe à l’Oignon Gratinée was a humble bistro favorite in France when the French cooking boom swept the United States in the early 60s. Jacqueline Kennedy hired a French White House chef, Julia Child was starting her television career and Gallic cuisine was haute. French onion soup caught on right away with Americans.

One of the world’s most beloved potages seems simple, but it often suffers from scorched or undercooked onions, salty store-bought broth, bread mush, the wrong cheese and the helter-skelter addition of other ingredients.

It Begins With Bouillon

She starts with the most important ingredient. “To achieve the true homemade taste, you’ll need a homemade bouillon made from beef bones and shank meat simmered for several hours with the usual carrots, onions, celery, seasonings and herbs.”

Even using purchased beef, chicken or vegetable stock, the nuances can be pumped up by simmering with vegetables, wine and onion-friendly herbs like thyme. Flexible onion soup can easily become a vegetarian dish by substituting meatless broth.

FRENCH ONION DIP
Lipton Onion Soup was introduced in 1952. It didn’t make particularly great onion soup, but it caught on in a big way when party hosts started combining the mix with sour cream as a quick dip. 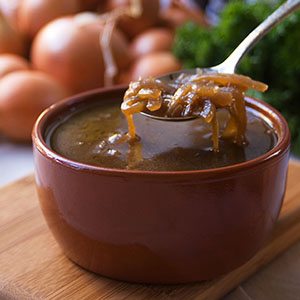 Onion-centric soup recipes typically call for common yellow onions, but those are not the only, or the best, choice. Like corn on the cob, apples and tomatoes, today’s onions have gone super-sweet. Raw sweet yellow onions are mild-tasting, but lose flavor when cooked. To amplify the onion flavor and add complexity, a mix of yellow, white, red and Cipollini (chip-oh-lee-knee) onions, along with shallots, should be sautéed. Green onions and chives add an extra nuance as final soup garnishes.

Chiffonade, chunked, puréed or minced? How onions are cut changes the taste and texture of a soup. For classic French onion soup, thinly-sliced strands that cling to the cheese are needed. Puréed onions play an essential supporting role in smooth-textured preparations like Onion and Almond Soup.

Excuse For A Good Cry

Any cook’s initial French onion soup effort can be a revelation because of the overwhelming volume of raw onions required. The average American consumes about 20 pounds of onions per year, and it can look like all of them are required to make one pot of soup. There is also a common side effect. To cut down the cloud of syn-propanethial-S-oxide, the active ingredient that irritates the eyes and nose, onions should be refrigerated for a few hours after peeling but before slicing, and it doesn’t hurt to turn on a fan.

As Julia demonstrated a half century ago on her TV show, a pile of onions will reduce to a tiny mound of caramelized treasure once the water is cooked out. However, there is no easy way to speed up the process. High heat burns onions and makes them bitter. Long, slow caramelization in butter turns the strands golden brown and produces flavorful treasure. 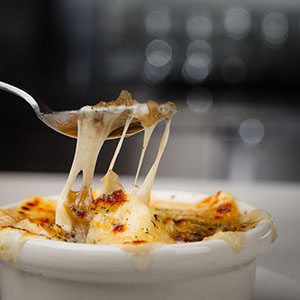 Not A Cheese Soup

Cheese soups like broccoli and cheddar are guilty delights, especially as a sandwich dip, but cheese assumes another role in onion soups. Traditionally, French onion soup is topped with sweet, nutty Gruyère, which melts into gooeyness but doesn’t dissolve. Many cooks use a mix of aged mountain cheeses ranging from Emmentaler and Comté to Manchego and Raclette.

One doesn’t need to be a cheesemonger to decide which cheese to choose, but rather play around with varieties. Caciotta al Tartufo adds an infusion of black truffle perfume and Camembert becomes a creamy crouton atop tomato soup. Cheeses to avoid include Mozzarella and Provolone, which tend to become stringy and rubbery. Queso Fresco and Feta are best sprinkled on soups like posole and gazpacho when served.

Featured as a haute menu item, onion soup is perceived as being too fancy and time-consuming to make at home. Once cooks make a batch, it becomes part of their repertoire, serving it as Julia suggested during a football game, as Sunday night supper or as a midnight snack.

John Lehndorff hosts Radio Nibbles weekly on KGNU-FM in Boulder, CO. You can listen to his podcast here. 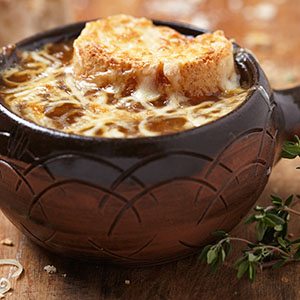 Some of the world’s favorite dishes star onions and cheese including:

In a deep soup pan, melt butter with oil, add onions and stir. There should be 7 to 8 cups of sliced onions. Let the onions cook covered over low heat for about 30 minutes or until translucent and soft. Remove the cover, raise the heat to medium and cook for another 30 minutes or so, stirring very frequently, until onions turn a dark golden brown. Add the flour and keep stirring for about 5 minutes until the flour absorbs the fat and turns light brown. Add 2 cups of broth and stir until flour is dissolved. Remove from heat and add the remaining broth, wine, bay leaf and thyme. Simmer gently for about 45 minutes. Season to taste with salt and pepper.

Cut the bread in slices at least 1½-inches thick, brush with butter or olive oil on both sides. For good measure, rub the toast with raw garlic cloves to give it a hint of garlic flavor. Toast in a 300-degree oven, flipping once, until browned. Bring the onion soup to a boil and then reduce heat. Add wine or Cognac. Pour soup into individual oven-proof bowls or casseroles on a cookie sheet. Fill the top of each with toasted bread and liberally pile each with shredded cheese. Place the soup in a 350-degree oven for about 20 minutes or until soup is teaming and cheese is melted. The final step is to place each casserole under a hot broiler to brown the cheese. Remove the soup, garnish with green onions or chives and serve immediately.

(Inspired by recipes from Julia Child and the National Onion Assn.)

In the region of Andalusia in Spain, Cebollada con Almendras is a popular soup. This soothing variation has a mild, crowd-pleasing appeal. 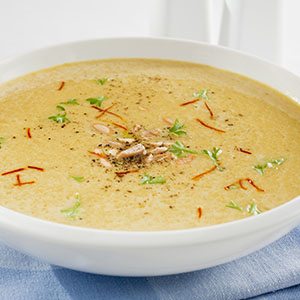 Heat butter and oil in a saucepan, add onions and garlic, and stir over low heat for about 25 minutes until soft and translucent. Grind toasted, blanched almonds in a blender until very fine; add about 1 cup broth and blend until very smooth. Add almond mixture to onions with the remaining broth, the wine and bay leaf. Bring to a simmer, cover and cook for 20 minutes. Add the saffron thread, simmer for 10 minutes and season to taste with salt and pepper.

To serve, ladle soup into individual heat-proof bowls on a baking sheet. Top each bowl with a slice of toast and sprinkle with Parmesan. Place bowls under the broiler for about 30 seconds until cheese is melted and lightly browned. Garnish with toasted sliced almonds. Serve immediately.