See how this favorite has been updated for today’s taste preferences.

Recently, I’ve noticed fondue sets, including a pot, table stand with burner and color-coated forks, are being sold in cookware shops and online again. I say “again” because a couple of times in my past, serving fondue was all the rage, and I loved serving this to my family and friends.

Like many fads, however, tastes change and my fondue pot was tucked away long ago. If yours is hidden or you never had one, now is a good time to rediscover fondue. Along with minimal guidelines for success, including almost no rules about proper accompaniments and condiments, the vessels have been given a makeover with newer pots that are more user friendly and perfect for stay-at-home entertaining.

When you consider the dynamics of these spear-and-dunk cheese-focused meals, the revival isn’t surprising. Fondues fit well with our desire for easily-prepared comfort foods and invite socializing. People of all ages can participate, and the relaxed style gets hosts or hostesses (or moms and dads) out of the kitchen and back with guests or family.

Swiss historians say fondues originated in the 17th century as an Alpine peasant dish. Details are sketchy, but generally focus on village families gathered around the evening hearth dipping chunks of bread in a pot of melted cheese, usually Emmentaler and/or Gruyère. The word fondue means “melted” in French. The cheese is gently cooked with wine and a splash of kirsch. Besides adding flavor, alcohol’s acidity helps break down cheese protein chains, making it less stringy and more digestible. A few drops of lemon juice or vinegar also help.

The first documented recipe “to cook cheese with wine,” or Käss mit Wein zu kochen, was published in Kochbuch der Anna Margaretha Gessner (1699), in Zurich. It included cheese, wine and eggs cooked in a wide earthenware or ceramic pot, or caquelon, over a portable stove lit with a candle or alcohol burner. In 1834, Brillat-Savarin, the noted French gastronome, described the mixture as “nothing other than scrambled eggs with cheese.”

By 1875, eggs were no longer used and classic Swiss fondue (or Neufchatel-style) was becoming the country’s national dish. But after WWI, there were severe economic shortages in Europe. Although Switzerland made hundreds of cheeses besides Gruyère and Emmentaler, the market for imported cheeses had steeply declined.

To support its dairy farmers, the Swiss Cheese Union began an aggressive marketing campaign to broaden consumption and sales of their different cheeses domestically and abroad with the slogan “Fondue is good and gives a good mood.”

The introduction of cornstarch into Switzerland in 1905 helped cheese fondues gain wider popularity, as it guaranteed the emulsion would remain smooth. Even with cornstarch, or flour as is sometimes used, it’s best to cook cheese fondues over medium or medium-low heat and never let them boil constantly.

Americans first encountered cheese fondue at the Swiss Pavilion of the 1939 New York World’s Fair and again in 1964. At the Alpine restaurant, hoards of visitors became enamored of dipping chunks of bread on long forks into vats of melted Swiss cheese, and the idea caught on. In 1952, Swiss-born chef Konrad Egli had already opened Chalet Swiss in New York. But beyond cheese fondue, Egli introduced fondue bourguignonne with beef cooked in oil in the late 50s and chocolate fondue in the 60s. Fondue pots became popular holiday gifts and favorite wedding presents.

Along with their spreading popularity, some amusing traditions evolved. For example, if a lady lost her bread in the cheese while swirling it, she had to kiss every gentleman present; for a gentleman who had that problem, he had to produce another bottle of wine or glass of kirsch for the host or hostess. If the same mistake happens again, whether male or female, they had to host the next fondue party.

Earthenware caquelons had a characteristic wide handle that I found useful when stirring my first fondue pot. The heavy-bottomed pans helped distribute the heat evenly to prevent the bottom from scorching. Still, a thin layer of crusty cheese often remained once the fondue was eaten. Called La Réligieuse, or the “nun”, it was lifted out like a wafer and equally divided among guests.

By the 60s or 70s, cast-iron and brightly-colored enameled fondue pots were imported into the American market. Today, along with pots with a nonstick interior or non-scratch external finish, some have electric cords with adjustable heat settings. Most hold enough melted cheese to serve six to eight, with that number of indentations in the open lid on top. More than that number, says Rick Rodgers, my friend and author of Fondue: Great Food to Dip, Dunk, Savor, and Swirl, (William Morrow, 1998), the cheese cools down. There are also small-scale fondue pots for two that can be romantic and fun.

My friend chef Kathleen Kenny Sanderson says that while today’s fondue pots are quite attractive and reasonably priced, rather than buying another piece of equipment, she thinks that an electric skillet works just as well to maintain the melted cheese at the table. Personally, I prefer making fondue in a deep heavy pan on top of the stove, then transferring it to a fondue pot set over a burner or into an electric skillet at the table.

When creating fondues, be guided by what appeals to you. In Rodger’s classic Swiss fondue, along with Gruyère and Emmentaler, he uses a small amount of Appenzeller. As in many fondues, the inside of his pot is first rubbed with a split clove of garlic. In other versions I’ve made, the garlic is sometimes minced or not used at all.

For a German-inspired fondue, I used hard cider, cider vinegar and a splash of apple brandy, along with Müenster and smoked Gouda cheese. The Blue cheese fondue is combined with Sauternes, a little cream to offset the saltiness and a few drops of lemon juice.

What to Serve with Fondue

Fondue’s original partner was bread, and it remains a perfect dipper. It should be firm or even slightly stale with a little crust so it doesn’t fall apart. I suggested pumpernickel bread with the German fondue recipe and semolina bread with golden raisins and fennel for the Blue cheese version, but the choice is yours. Even pretzel logs would be good. Rodgers suggests spreading roasted garlic on the bread before dipping.

For other dippers, I like to include ingredients of different colors, tastes and textures, but limited to about six choices. Lee Smith, publisher of Cheese Connoisseur, who has eaten more than a few fondues, suggests that along with bread and small potatoes, you want things that are pickled, like onions, sweet and sour beets or gherkins for the acidity to offset the fattiness of the cheese. Slices of tart green apples or dried fruits, like apricots and prunes, also make nice foils.

Crunchy foods like small fennel wedges, celery sticks or blanched broccoli florets add another taste dimension. The melted cheese can also be seasoned with minced fresh herbs, like tarragon, or caraway seeds in a German-inspired version.

As for condiments, grocery aisles offer a global assortment. Pesto? Mix it with the melted cheese, suggests Rodgers, or add minced vegetables. If curry is a favorite flavor, why not add grated fresh ginger and curry powder to Cheddar cheese? Markets are filled with great fondue fixings like thinly-sliced meats, peeled shrimp and chicken morsels, along with a large variety of sausages and pre-cut vegetables.

Along with Pucci prints and martinis, fondue is back. This fad of yesteryear is once again a hot entertaining idea. 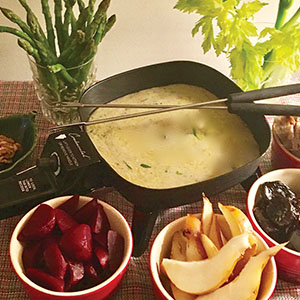 I tasted different Blue cheeses to develop this recipe. First was Roquefort, which is often served with Sauternes, but it was too sharp and salty. After several others, I thought Gorgonzola and Maytag Blue were both delicious options. I learned Blue cheeses vary so widely that you should choose a crumbly variety according to your taste and budget, and don’t be afraid to mix two or more together.

In a bowl, toss the cheese and cornstarch together to coat. Set aside.

In a heavy-bottomed saucepan, heat the oil over medium heat. Add the garlic, mashing it with the back of a fork, then add the shallot and cook until golden, about a minute. Pour in the wine and lemon juice and bring just to a boil. Remove the garlic. Reduce the heat to a simmer and stir in the cream.

Stir in the cheese in batches, making sure each handful is melted before adding the next one. The fondue can bubble, but do not let it boil constantly. Add the tarragon, nutmeg and pepper; transfer to a fondue pot and serve with the dipping ingredients. 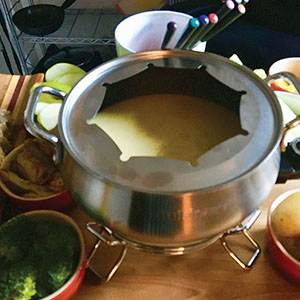 Thanks to Rick Rodgers, my friend and author of Fondue: Great Food to Dip, Dunk, Savor, and Swirl, for sharing his classic version of Swiss fondue with me. Along with Emmentaler and Gruyère, he includes some Appenzeller

Place the fondue pot in the center of a large platter. Add the dipping ingredients around it or in separate ramekins.

In a medium-size bowl, combine the Gruyère, Emmentaler and Appenzeller cheeses with the cornstarch and toss to blend.

Rub the inside of medium, heavy-bottomed saucepan with the garlic; discard. Add the wine and lemon juice and bring just to a simmer over medium heat. Stir in the cheese mixture a handful at a time to the wine, stirring each batch until it is almost completely melted before adding another one. The fondue can bubble gently, but do not let it boil. Stir in the kirsch, season with a few gratings of nutmeg and pepper to taste.

Transfer to the fondue pot and keep warm over a fondue burner. Serve at once.