The Cheester: A Real Good Egg

Annem Hobson has no problem being cheesy when it comes to Easter eggs.

From this idea emerged the Cheester Egg, which is produced using a specially-devised, unique recipe by Wildes’ head cheesemaker Philip Wilton. The recipe is based on the cheesemaker’s popular Napier cheese, which was awarded London’s Favorite Cheese in 2015’s Urban Food Awards by Boris Johnston, mayor of London.

What makes this unique product so successful is the cheese itself, which is semi hard, slightly crumbly, yet with a creamy texture that allows it to be more easily molded into a giant, unconventional egg shape.

If the Cheester Egg’s format was meant to be an attention-grabbing gimmick, it worked; Wildes couldn’t keep up with the demand, and the product, available online and across the United Kingdom at select London food markets, was temporarily out of stock weeks before Easter Sunday.

Much of the credit is due to Napier’s deliciously sharp flavor, which is partly attributed to high-quality unhomogenized cow’s milk and vegetarian rennet. It also provides a nice departure for those seeking an alternative to the omnipresent chocolate during this holiday. 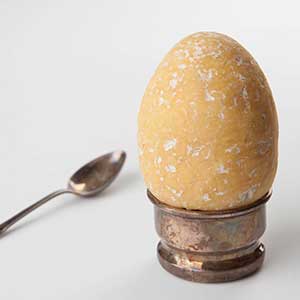 The Cheester Eggs cost £14.95 (or about $19) for approximately 260g of large, solid, hand-made cheese. For those wanting a more luxurious treat, there are also ‘Nest Hampers’ available for £29.95 (or about $38) that includes the Cheester Egg, Peter’s Yard Sourdough Crispbread and London locally-produced quince membrillo in a straw basket.

The Cheester Eggs are available for delivery, online across the United Kingdom from So Wrong It’s Nom. Customers can also ‘click and collect’ by ordering online from Broadway Market, Alexandra Palace Market or Myddelton Road Market. The Cheester Eggs also can be ordered directly from Wildes Cheese.

Hobson, who owns the trademark for Cheester Egg, enjoyed enormous success with her Cheese Advent Calendar prototype last Christmas. In just one week, more than 11,000 people registered their interest to purchase it in 2017. The calendar, which received celebrity shout-outs from Zooey Deschanel, Taio Cruz and Emma Bunton, proved so popular that a business idea was born. The Cheese Advent Calendar will now be available to buy this Christmas, after signing a contract with cheese supplier, Norseland, the Darien, CT-based maker of the Jarlsburg brand.

Says Hobson about her unique offerings, “Chocolate is okay, but it’s a little boring, and frankly I’m sick of seeing it dominating key retail periods. Cheese is what excites me, so I’m thrilled my plans for a Cheester Egg have finally hatched and the Cheese Advent Calendar is becoming a reality. There’s a whole army of cheese lovers out there showing me their support, and I hope I’m doing them proud.”

Wildes Cheese is no stranger to creative cheese concoctions. The cheesemaker’s cheese wedding cake with tiered wheels of cheese adorned by roses and baby’s breath or colorful fruit assortments also are attention-getters. Established in 2012, it produces a wide variety of traditional cheese formats with recipes that use milk from a single herd of Jersey cows, which graze the lush fields of England’s Lune Valley in Lancashire. Its lines are created with vegetarian rennet, time and “a lot of love and passion.” In only five short years, the cheesemaker moved from a residential kitchen to a small garage space on a North London industrial estate and finally to its current home in Tottenham, North London. Its artisan, hand-made cheeses are available at retailers and restaurants throughout the city.

For those in the London area or visiting the region, Wildes also will hire out its micro dairy for private classes, corporate team building or group cheesemaking sessions.