This provider of all-American Italian cheese from Wisconsin has a long history of tradition and many years of accolades.

Cheese is truly amazing—from only milk, salt, culture and rennet, thousands of unique cheeses come to life. But what really makes cheese so fascinating is its stories, which sprout from generations of culture, tradition and innovation. Telling the stories of cheeses means telling the story of people, places and lives.

Green Bay, WI-based BelGioioso Cheese is celebrating its 40th anniversary this year, but its story begins long before 1979. More than a century ago, the great-grandfather of BelGioioso president Errico Auricchio founded a cheese company in southern Italy. In 1979, Auricchio moved his family from Italy to America. His goal was to continue his great-grandfather’s legacy, which meant crafting the best Italian cheeses possible in the United States. His grandfather taught him that integrity meant taking the time to do things right and without cutting corners.

It was in Wisconsin, “America’s Dairyland”, that Auricchio found the skilled farmers, lush green pastures, corn fields and healthy cows that produce the highest quality milk: the raw ingredients for him to craft his cheese. He decided to settle there. Since then, BelGioioso has been an American and Italian collaboration, using Wisconsin terroir and milk and Italian-inspired recipes and techniques to make cheese that is both truly Italian and genuinely American.

“I came to the United States in 1979 with two cheesemakers to start crafting sharp Provolone in Wisconsin,” recounts Auricchio, who continues to serve as BelGioioso’s president today. “Mauro Rozzi and Gianni Toffolon were young cheesemakers in Italy who moved their families here to start production of the cheese out of a rented cheese factory in Wrightstown, WI. We made cheese there for a while and then purchased the Hebel’s Corner Cheese factory in Denmark, WI, where we increased production and settled in to expand the company,” says Auricchio.

In 1982, only three years after starting production in the U.S., BelGioioso’s Provolone was judged “Best in Class” at the World Championship Cheese Contest and won the coveted title of “World’s Best Provolone.” It was an auspicious beginning, and many more achievements were to follow.

With their Provolone’s success, the company decided it was time to grow. They purchased a second plant in Pulaski, WI, where they began to craft an expanded lineup of classic Italian cheeses: Parmesan, Romano, Asiago, Fontina, Auribella Italian sharp, Kasseri and Toscanello.

It was an exciting time in culinary America; people were traveling more and becoming more adventurous in their food choices. They sought out new flavors, textures and experiences, and BelGioioso’s new cheeses fit the bill.

In 1990, the company began making Mascarpone cheese, which was awarded “Best of Class” at the American Cheese Society Conference a year later.

In the years that followed, the awards continued to roll in, and the product line continued to expand—BelGioioso introduced Gorgonzola, fresh Mozzarella and freshly grated and shredded Parmesan and Romano. They built a third manufacturing plant in Chase, WI, and expanded the plant in Denmark. They introduced American Grana, an extra aged Parmesan, Pepato and more.

Today, BelGioioso Cheese has 10 facilities in Wisconsin and one in New York, crafting over 27 different varieties of cheese. “We have had tremendous growth during the last 40 years,” Auricchio says. “Our biggest break through was the introduction of fresh Mozzarella. We started small and are now the leader of the category.”

A Commitment to Quality

Great cheese begins with fresh, excellent milk. BelGioioso remains committed to sourcing Wisconsin’s finest milk, just as they set out to do 40 years ago. The company maintains cheese plants that are located within a 30-mile radius of the farmer that supplies its milk, so the milk never has to travel too far. “It’s almost as good as a zero-mile radius,” jokes Auricchio. “We have built close relationships with our farmers and the truck drivers who pick up the fresh milk every day.” BelGioioso’s cows enjoy a nutritionally-rich diet that includes alfalfa and corn, and they are never administered antibiotics or artificial growth hormones (rBST).

BelGioioso tests milk in its own state-of-the-art laboratories, ensuring they maintain the highest standards. Typically, a cow milked early in the morning has her milk made into cheese the very same day to deliver the highest nutritional value and best flavor profile possible. The milk never travels long distances or sits around.

The commitment to excellence continues in each step of the cheesemaking process. “We now have eight certified Master Cheesemakers on staff who continue to share the knowledge they have gained,” says Auricchio. BelGioioso grows its own starter cultures, which ensures that the uniqueness of the flavor and consistency of their cheese is handed down from batch to batch and generation to generation. As the milk gets transformed into different cheeses in a series of steps that include setting, resting, cutting, cooking, stirring and pressing, expert cheesemakers lend their deep knowledge. BelGioioso uses a traditional, lengthy method of naturally salting cheeses in a brine solution (water + salt) for the right amount of time. “Cheeses like American Grana can be brined for as long as three weeks, which helps develop its nuanced, authentic flavor,” says Auricchio.

When the cheeses are made, many go on to mature in their own specialized climate-controlled caves. In these precisely-monitored environments, cheesemakers carefully inspect and hand-turn each wheel to ensure proper drying, rind formation, uniform distribution of salt and development of flavor. It’s another example of practicing the old, traditional way—even when it takes more time, money and work. The effort is evident in the complex, rich flavor of BelGioioso’s aged cheeses, like its American Grana and Parmesan.

Even though the BelGioioso operation has grown into an extensive one, they still maintain a real artisan touch; each and every cheese is treated individually, according to its own personality, and a section of each plant is specifically designed and dedicated to each variety.

BelGioioso is able to oversee the most minute details on every level, from monitoring the composition of the milk to creating a specific environment for the production of each cheese variety. They also have devoted expert cheesemakers for each type of cheese who make sure every single batch is up to their exacting standards.

BelGioioso’s best assets are their consistency and quality of flavor, along with their accessibility to consumers at a fair price throughout the country.

“The commitment to quality is in our DNA,” Auricchio states. “Even in the dark times, we did not compromise on quality.” 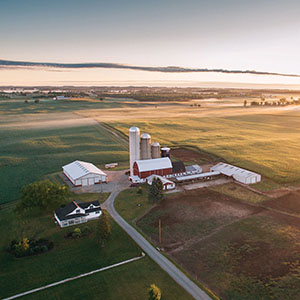 Protecting the environment has never been more important. For BelGioioso, this means employing responsible use of resources and care for the earth and working hard to make sure their production supports and nurtures the ecosystem, rather than damages it.

This manifests in many ways. Take packaging—BelGioioso works to use a simplified structure to limit the amount of packaging materials, and 30 percent of those materials are recycled. They employ an in-plant water reuse filtration system in each factory and use skylights and motion sensors throughout to conserve energy. BelGioioso also supports organizations like the Boys and Girls Club, investing in the community that the company is an integral part of.

“Many larger companies have tried to acquire us, but I have kept the company privately held to protect the employees,” Auricchio explains. “We have continually invested in our employees and facilities, and this investment has kept us moving forward.”

Cheeses to Keep Coming Back To

The family of cheeses has received more than 130 awards from the World Cheese Championship, the American Cheese Society, the U.S. Cheese Championship, and more. When chefs and cheese connoisseurs seek out BelGioioso cheeses, they know they are getting top quality and consistency.

As for the cheeses, where to start? Maybe with the sharp Provolone, where BelGioioso began. Never smoked or bleached, this all-natural cheese is made from whole cow’s milk and aged in special curing rooms for several months. It has a piquant flavor that delivers a punch to any recipe.

American Grana is crafted by master cheesemakers, who shape the 65-pound wheels and allow them to mature for a minimum of 18 months in their special caves. The premium raw cow’s milk and distinctive aging process are what creates the cheese’s deep, nutty flavor and addictive granular texture. Exclusive to BelGioioso, American Grana is a staple in any kitchen for the savory complexity it adds to pastas, pizzas and soups. Or feature it on a cheese plate with fresh fruits, olives and a Barolo or an amber ale.

As for fresh cheeses, it’s impossible to go wrong with BelGioioso’s Burrata. It looks just like a ball of fresh Mozzarella, but oozes gorgeously when split open. Inside, its full of fresh Mozzarella curds and sweet heavy cream. All it needs is a drizzle of extra-virgin olive oil and a grind of black pepper to become an elegant appetizer. Each ball is hand-formed and made to order from fresh milk gathered daily from local farmers, and they also offer a black truffle-flavored Burrata. The luscious cheese is even more miraculous with a crisp Vermentino or a dry rosé.

That’s just the beginning. There’s Artigiano, crafted using home grown cultures that have been developed over decades to achieve a wonderfully nutty and sweet flavor profile.

Their crumbly Gorgonzola has a semi-soft, crumbly texture and full, earthy flavor, and is a very good friend to burgers.

Fontina has a mild, yet slightly sweet flavor and a smooth, almost silky texture. Aged for over 60 days, it’s a true classic.

The rest of BelGioioso’s offerings are many, from fresh curd and milky Mozzarella to three different varieties of Asiago to some of the freshest Ricotta available, their incredible Ricotta con Latte.

For BelGioioso and those of us who enjoy its cheeses, the future looks bright.

“My children have joined me and will carry on the BelGioioso philosophy of commitment to quality and consistency in the years to come,” says Auricchio. “Our company will continue to grow, but we will never lose the passion we started with.”