Alto Adige –The Home Of Speck

Discover why this northern Italian meat is so coveted

Located in Northern Italy, Trentino-Alto Adige or as it is also called, South Tyrol, is a peaceful autonomous region of Italy sharing the border of Switzerland and Austria. Its past is a series of changing borders, cultural diversity and raging wars. Sitting on the south side of the Alps and Dolomite Mountains, the terrain is beautiful and mountainous.

During the First World War, the area was the scene of major battles and considered a key, strategic location. After the collapse of the Austro-Hungarian war, Italian troops occupied the area, and it was later annexed as part of Italy in 1918.

The result is a complex mix of cultures. Four languages are spoken in this area—Italian, German, Ladin, Mòcheno and Cimbrian. The last two are old Bavarian dialects. After the Roman Empire integrated the Alps centuries before, the local Rhaetian people adopted Ladin as their language. Isolated, they developed their own cultural identity. 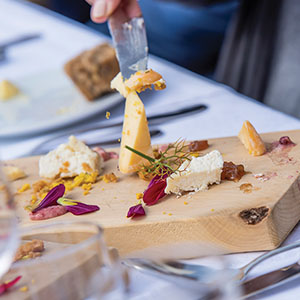 While many people think of Trentino-Alto Adige’s history going back to the Holy Roman Empire, its beginning are far older. About 25 years ago, a couple were hiking on a glacier in the Ötz Valley Alps and stumbled across one of the most important mummies of our time.

Ötzi, as he was later called, is 5300 hundred years old and one of the most well-preserved glacial mummies ever found. He was discovered almost completely intact with his clothing, weapons, even food still in his stomach. In 2001, an arrow was discovered embedded in his shoulder, finally confirming the matter of his death by murder.

Ötzi must have been a man of wealth and power. He was 46 and a relatively old man. He lived at the beginning of the Copper Age, and he was found with a copper axe, a very valuable weapon of the time. It is believed he suffered from arthritis, and he had tattoos in areas that corresponded with certain neuralgic points in an effort to treat it.

Today, Ötzi has his own museum in the South Tyrol Museum of Archaeology in Bolzano. A climatically-controlled ice box allows visitors to see Ötzi. He was a wiry man who, other than being small of stature, would have fit perfectly into today’s society. Everything is remarkably preserved and in pristine condition. When looking at his robe of animal skins, after a minute or so, you come to realize that his cloak is patterned with light and dark skins much like an accomplished furrier would do today.

Why is Ötzi important when considering a modern specialty like speck? Ötzi shows us that the Tryolian culture existed before the ancient Egyptians. He is most closely related to the Ladin, but his origins were from the Middle East during the Neolithic period, a time when farming and animal raising were spreading. His genetic makeup also includes small pockets of ancestors in Corsica and Sicily. 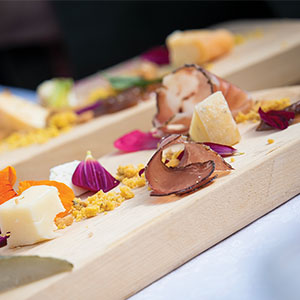 Is it any surprise that Speck Alto Adige is a mixture of Mediterranean and Northern European cultures? Between ancient and modern times, Alto Adige has been a diversified mixture of cultural identities.

The process combines preservation techniques from the Mediterranean and Northern Europe. From the Mediterranean, the hams are dry-cured using salt and aged in the sweet mountain winds. From Northern Europe comes the method of salting, smoking and seasoning with local herbs and spices. The result is a dry-cured ham best described as “a little salt, a little smoke and lots of fresh mountain air.”

When it comes to the spices, every producer has their own recipe, often closely guarded for generations. The actual production includes five separate processes.

Step one is the selection of the raw material. The pigs are fed a specific diet, and speck is make from lean, full meat thighs that have passed through a careful inspection. The meat must not be frozen or imported from another region. Each ham will be marked with its own identification number indicating the beginning of the production process. This assures that the ham will be properly aged, and no shortcuts are taken.

Step two is the seasoning of the hams. The salt and pepper mixture remain the same for all, but each producer adds its own carefully guarded recipe that includes its own mixture of spices. Typically, juniper berries, rosemary, oregano and bay leaves are used but garlic, coriander or cumin may also be added. This gives the ham its characteristic fragrant aroma.

Before the smoking process, the thighs will be allowed to marinate for up to three weeks in cold rooms. During this period, the hams will be turned, and the marinade will penetrate. At the end, salt must not be more than 5 percent of weight. This is the process that will distinguish producer from producer. This will be the mark of distinction.

Step three occurs after the curing. The hams will be smoked in a traditional manner using a little smoke and lots of fresh air. The process will alternate between smoking and air-drying.

Beach wood is the typical wood used and it is a cold smoke process. If the temperature gets too high, the pores of the ham will close, not allowing the smoke to penetrate.

Step four is when the hams will rest. This long and slow curing process allows the hams to mature and develop a mild, sweet taste. As in the past, the cellars of South Tyrolean farms are well ventilated with mountain air, fresh and clean. The time to maturity averages about 22 weeks.

An edible layer of mold will develop on the rind, preventing the ham from drying out too much. Once the hams are finished aging, the mold layer will be washed off prior to packaging. It is this layer of mold that allows the aging to be even. It balances out the intense flavors and aromas.

Step five is the stringent quality checks that assure Speck Alto Adige PGI delivers on its promise of high quality and satisfied consumers. Auditors have access to every step in the process and check on everything from the fat to lean ratio, the salt content, fragrance and flavor.

Of course, product this grand must have its own festival, and Speck Alto Adige is no exception. Held annually, its setting is the mountain village of Santa Maddalena/St. Magdalena in Funes/Villnöss. Beautiful and serene, surrounded by the Odle peaks, part of the Dolomites, the view is breathtaking. The uniqueness of the Dolomites led to their designation as a UNESCO World Heritage Site.

This is the birthplace of the famed mountaineer Reinhold Messner and the mile-long hike to the festival from the parking lot below reminds one of a people used to walking up steep hills.

Once there, there are long communal tables surrounded by stands where everything South Tyrolean is displayed, from local crafts to traditional foods. Fresh-baked bread right from the oven to dumpling (knuddel) making demonstrations. The dumplings are the typical stale bread versions with eggs, onions and, of course, speck. Served either dry or in broth, they are hearty and delicious, perfect for the fresh mountain air. Knuddling also has a second meaning—the innocent hugging and kissing of young people in love. Maybe not so innocent, but who’s to say?

There are also funnel cakes—the same as made by many Amish/Mennonite communities. Batter dropped into oil and fried, then covered with powdered sugar and local jam. Light and airy, they are obviously a festival treat for young and old.

There is plenty of speck, cut thicker with a ribbon of fat that is perfect for snacking. But don’t snack too much, because the main meal of platters of Speck Alto Adige, cooked meats, local delicacies and dessert are all coming.

And what is a festival without entertaining? Bands will play, dancers will dance traditional dances, singers will sing. All is good fun, with a delightful family feeling. The atmosphere is about clean air, good food and friends.

Keep in mind, this is not prosciutto. It is uniquely Speck Alto Adige PGI. It may be eaten in paper-thin slices, but traditionally it is cut by hand into thicker slices. Do not cut off the fat, as it is meant to be eaten. Many people, however, prefer to cut off the crust, as it may be strong and aromatic.

Speck can be served as a snack by itself or with fruit, such as apples and pears or with cheese. A perfect pairing is Asiago from nearby Trentino, although any alpine style cow’s milk cheese will do.

Speck is also used in cooking, chopped and incorporated into dumplings. Frittatas made with speck will be flavorful, but not overpowering. And, since it is spring, I must admit to my favorite—speck and asparagus.  A meal to be savored.